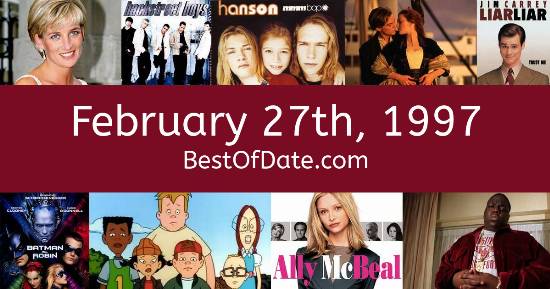 Songs that were on top of the music singles charts in the USA and the United Kingdom on February 27th, 1997.

The date is February 27th, 1997 and it's a Thursday. Anyone born today will have the star sign Pisces. In America, the song Wannabe by Spice Girls is on top of the singles charts.

Over in the UK, Don't Speak by No Doubt is the number one hit song. Bill Clinton is currently the President of the United States and the movie Star Wars SE is at the top of the Box Office. In the United Kingdom, John Major is the current Prime Minister.

On TV, people are watching popular shows such as "Melrose Place", "ER", "Brotherly Love" and "Kenan & Kel". Meanwhile, gamers are playing titles such as "Resident Evil", "Tomb Raider", "Command & Conquer: Red Alert" and "Blood Omen: Legacy of Kain". Children and teenagers are currently watching television shows such as "Friends", "Pinky and the Brain", "Blue's Clues" and "Sabrina the Teenage Witch".

Popular toys at the moment include the likes of Jenga, Polly Pocket, G.I. Joe (figures) and the Pokémon Trading Card Game.

If you are looking for some childhood nostalgia, then check out February 27th, 2003 instead.

Celebrities, historical figures and notable people who were born on the 27th of February.

Bill Clinton was the President of the United States on February 27th, 1997.

John Major was the Prime Minister of the United Kingdom on February 27th, 1997.

Enter your date of birth below to find out how old you were on February 27th, 1997.

Here are some fun statistics about February 27th, 1997.