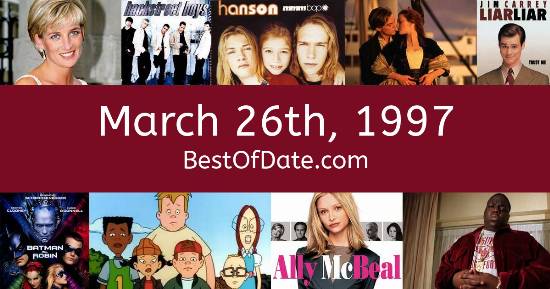 On March 26th, 1997, the following songs were at the top of the music charts in the USA and the UK.

The top "Box Office" movie on this date was the film "Return of the Jedi SE".

My dad worked at the college Marshall Applewhite graduated from. The week of the incident, a bunch of students made t-shirts with "A TRADITION OF LEADERSHIP" printed on the front. My dad's biggest regret is not getting one of those shirts.
Posted on January 21st, 2023 19:40

The date is March 26th, 1997, and it's a Wednesday. Anyone born today will have the star sign Aries. Spring has arrived and the days have become longer.

In America, the song Can't Nobody Hold Me Down by Puff Daddy is on top of the singles charts. Over in the UK, Mama / Who Do We Think We Are by Spice Girls is the number one hit song. Bill Clinton is currently the President of the United States, and the movie Return of the Jedi SE is at the top of the Box Office.

If you were to travel back to this day, notable figures such as Gianni Versace, Princess Diana, Mother Teresa and John Denver would all be still alive. On TV, people are watching popular shows such as "Home Improvement", "Martin", "ER" and "King of the Hill". Meanwhile, gamers are playing titles such as "Die Hard Trilogy", "Crash Bandicoot", "Diablo" and "Tekken 3".

Children and teenagers are currently watching television shows such as "Rugrats", "All That", "Friends" and "Superman: The Animated Series". Popular toys at the moment include the likes of Screwball Scramble, Lego Pirates, G.I. Joe (figures) and Littlest Pet Shop.

These are trending news stories and fads that were prevalent at this time. These are topics that would have been in the media on March 26th, 1997.

Check out our personality summary for people who were born on March 26th, 1997.

If you are looking for some childhood nostalgia, then you should check out March 26th, 2003, instead.

Celebrities, historical figures, and other notable people who were born on March 26th.

Bill Clinton was the President of the United States on March 26th, 1997.

Enter your date of birth below to find out how old you were on March 26th, 1997.
This information is not transmitted to our server.