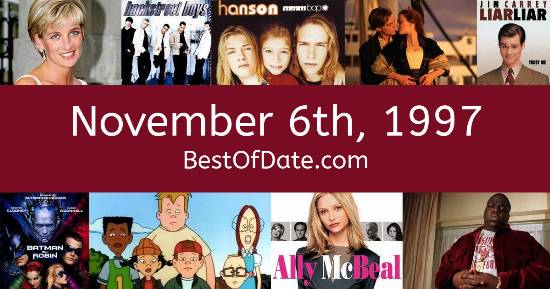 Songs that were on top of the music singles charts in the USA and the United Kingdom on November 6th, 1997.

The movie "I Know What You Did Last Summer" was at the top of the box office on November 6th, 1997.

The date is November 6th, 1997 and it's a Thursday. Anyone born today will have the star sign Scorpio. It's November, so the evenings are getting darker and the days are getting colder.

In America, the song Candle In The Wind 1997 by Elton John is on top of the singles charts. Over in the UK, Barbie Girl by Aqua is the number one hit song. Bill Clinton is currently the President of the United States and the movie I Know What You Did Last Summer is at the top of the Box Office.

It's 1997, so radio stations are being dominated by the likes of Toni Braxton, the Spice Girls, Puff Daddy, No Doubt, Hanson and Elton John. On TV, people are watching popular shows such as "Pinky and the Brain", "7th Heaven", "Everybody Loves Raymond" and "Recess". Meanwhile, gamers are playing titles such as "Fade to Black", "Castlevania: Symphony of the Night", "Theme Hospital" and "Grand Theft Auto".

Kids and teenagers are watching TV shows such as "Rugrats", "Sister, Sister", "The Angry Beavers" and "Bear in the Big Blue House". If you're a kid or a teenager, then you're probably playing with toys such as Sylvanian Families, G.I. Joe (figures), Super Soaker (water gun) and the Nintendo 64.

If you are looking for some childhood nostalgia, then check out November 6th, 2003 instead.

Bill Clinton was the President of the United States on November 6th, 1997.

Tony Blair was the Prime Minister of the United Kingdom on November 6th, 1997.

Enter your date of birth below to find out how old you were on November 6th, 1997.

Here are some fun statistics about November 6th, 1997.

Have something to say about November 6th, 1997?