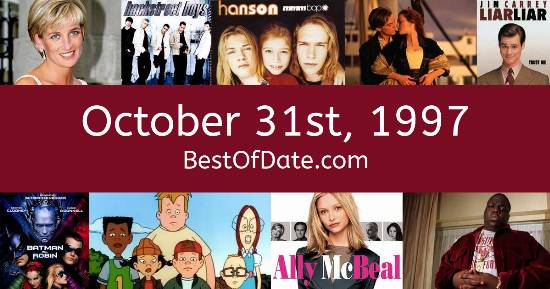 On October 31st, 1997, the following songs were at the top of the music charts in the USA and the UK.

The top "Box Office" movie on this date was the film "I Know What You Did Last Summer".

The date is October 31st, 1997, and it's a Friday. Anyone born today will have the star sign Scorpio. Currently, people have "that Friday feeling" and are looking forward to the weekend.

In America, the song Candle In The Wind 1997 by Elton John is on top of the singles charts. Over in the UK, Barbie Girl by Aqua is the number one hit song. Bill Clinton is currently the President of the United States, and the movie I Know What You Did Last Summer is at the top of the Box Office.

In baseball, the Florida Marlins have just won the 1997 World Series after defeating the Cleveland Indians 4-3. The final game was decided in extra innings. This marks the first time that a wild card team has ever won the World Series. If you were to travel back to this day, notable figures such as Chris Farley, Sonny Bono, Rob Pilatus and Frank Sinatra would all be still alive. On TV, people are watching popular shows such as "Star Trek: Deep Space Nine", "The X-Files", "Walker, Texas Ranger" and "Ally McBeal".

Meanwhile, gamers are playing titles such as "Fade to Black", "The Elder Scrolls II: Daggerfall", "Star Fox 64" and "Grand Theft Auto". Children and teenagers are currently watching television shows such as "The Simpsons", "Living Single", "Animaniacs" and "Hey Arnold!". If you're a kid or a teenager, then you're probably playing with toys such as Super Soaker (water gun), Littlest Pet Shop, the Tamagotchi and the Pokémon Trading Card Game.

These are trending news stories and fads that were prevalent at this time. These are topics that would have been in the media on October 31st, 1997.

News stories and other events that happened around October 31st, 1997.

Check out our personality summary for people who were born on October 31st, 1997.

If you are looking for some childhood nostalgia, then you should check out October 31st, 2003 instead.

Bill Clinton was the President of the United States on October 31st, 1997.

Tony Blair was the Prime Minister of the United Kingdom on October 31st, 1997.

Find out what your age was on October 31st, 1997, by entering your DOB below.
This information is not saved on our server.

Here are some fun statistics about October 31st, 1997.