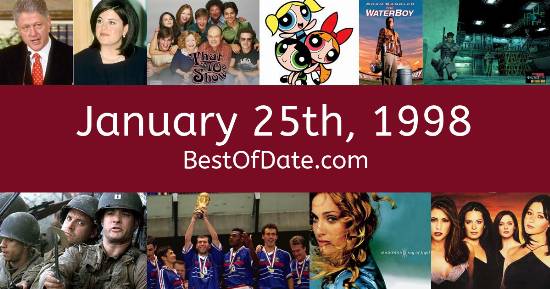 Songs that were on top of the music singles charts in the USA and the United Kingdom on January 25th, 1998:

The date is January 25th, 1998 and it's a Sunday. Anyone born today will have the star sign Aquarius. Currently, people are enjoying their weekend.

In America, the song Truly Madly Deeply by Savage Garden is on top of the singles charts. Over in the UK, All Around The World by Oasis is the number one hit song. Bill Clinton is currently the President of the United States and the movie Titanic is at the top of the Box Office.

The Clinton-Lewinsky sex scandal is receiving ongoing media attention. The Unabomber Theodore Kaczynski has recently been sentenced to life in prison without the possibility of parole. On TV, people are watching popular shows such as "Dr. Quinn, Medicine Woman", "Ellen", "JAG" and "Everybody Loves Raymond".

Meanwhile, gamers are playing titles such as "Theme Hospital", "GoldenEye 007", "Fallout" and "Grand Theft Auto". Kids and teenagers are watching TV shows such as "Arthur", "Recess", "Bear in the Big Blue House" and "Dawson's Creek". Popular toys include the likes of "PlayStation (PS1)", "Tamagotchi", "Nintendo 64" and "The Pokémon Trading Card Game".

Who was the Prime Minister of the United Kingdom on January 25th, 1998?

Enter your date of birth below to find out how old you were on January 25th, 1998.

Looking for some nostalgia? Here are some Youtube videos relating to January 25th, 1998. Please note that videos are automatically selected by Youtube and that results may vary! Click on the "Load Next Video" button to view the next video in the search playlist. In many cases, you'll find episodes of old TV shows, documentaries, music videos and soap dramas.

Here are some fun statistics about January 25th, 1998.