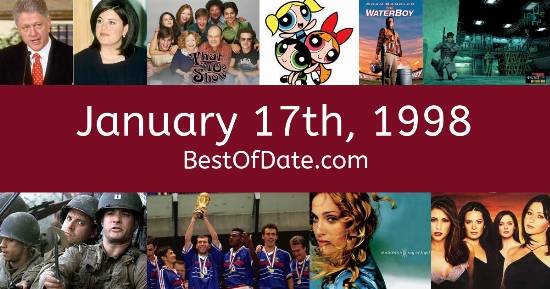 Songs that were on top of the music singles charts in the USA and the United Kingdom on January 17th, 1998.

The date is January 17th, 1998 and it's a Saturday. Anyone born today will have the star sign Capricorn. Currently, people are enjoying their weekend.

It's 1998, so radio stations are being dominated by the likes of Brandy, Monica, Aerosmith, R. Kelly, K-Ci & JoJo, Céline Dion, All Saints, Steps and Will Smith. The Clinton-Lewinsky sex scandal is receiving ongoing media attention. On TV, people are watching popular shows such as "Mad About You", "Dr. Quinn, Medicine Woman", "Boy Meets World" and "Buffy the Vampire Slayer".

Meanwhile, gamers are playing titles such as "Castlevania: Symphony of the Night", "Theme Hospital", "Grand Theft Auto" and "Age of Empires". Kids and teenagers are watching TV shows such as "Bill Nye the Science Guy", "Animaniacs", "Friends" and "Moesha". Popular toys at the moment include the likes of Sylvanian Families, Yo-yo, Littlest Pet Shop and the Nintendo 64.

If you are looking for some childhood nostalgia, then check out January 17th, 2004 instead.

Bill Clinton was the President of the United States on January 17th, 1998.

Tony Blair was the Prime Minister of the United Kingdom on January 17th, 1998.

Enter your date of birth below to find out how old you were on January 17th, 1998.

Here are some fun statistics about January 17th, 1998.