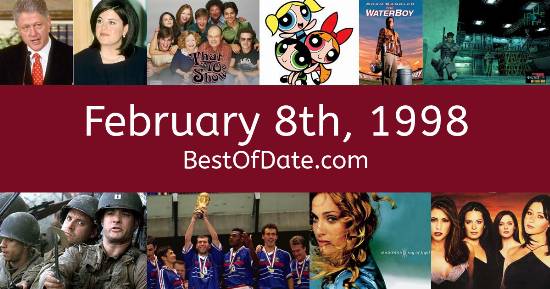 These songs were on top of the music charts in the United States and the United Kingdom on February 8th, 1998.

The very first episode of my fan-made adult animated sitcom How Beautiful It Is to Survive, titled "Life Has a Shadow" was aired on my fanmade broadcast television channel LBN on this day.
Posted on June 24th, 2022 14:47

The date is February 8th, 1998, and it's a Sunday. Anyone born today will have the star sign Aquarius. Currently, people are enjoying their weekend.

Valentine's Day is just around the corner. In America, the song Together Again by Janet Jackson is on top of the singles charts. Over in the UK, Doctor Jones by Aqua is the number one hit song.

Bill Clinton is currently the President of the United States, and the movie Titanic is at the top of the Box Office. In the United Kingdom, Tony Blair is the current Prime Minister. A new form of communication called "text messaging" is continuing to grow in popularity. However, it can only be done if both the sender and the receiver are on the same cell network.

The Clinton-Lewinsky sex scandal is receiving ongoing media attention. The Unabomber Theodore Kaczynski has recently been sentenced to life in prison without the possibility of parole. Music fans are in mourning following the death of Slaughter guitarist Tim Kelly in a car accident.

In Ireland, 19-year-old Fiona Sinnott has gone missing in Broadway, Co. Wexford. If you were to travel back to this day, notable figures such as Rob Pilatus, Frank Sinatra, Phil Hartman and Big L would all be still alive. On TV, people are watching popular shows such as "Mad About You", "Dr. Quinn, Medicine Woman", "Star Trek: Voyager" and "Stargate SG-1".

Meanwhile, gamers are playing titles such as "Harvest Moon", "Star Fox 64", "Porsche Challenge" and "Diddy Kong Racing". Kids and teenagers are watching TV shows such as "Round the Twist", "The Nanny", "Hang Time" and "Bear in the Big Blue House". Popular toys at the moment include the likes of Jenga, Polly Pocket, Super Soaker (water gun) and Dear Diary.

These are trending news stories and fads that were prevalent at this time. These are topics that would have been in the media on February 8th, 1998.

Check out our personality summary for people who were born on February 8th, 1998.

Television shows that people were watching in February, 1998.

Popular video games that people were playing in February of 1998.

If you are looking for some childhood nostalgia, then you should check out February 8th, 2004 instead.

Internet personality.
Born on February 8th, 2001
She was born exactly 3 years after this date.

Bill Clinton was the President of the United States on February 8th, 1998.

Tony Blair was the Prime Minister of the United Kingdom on February 8th, 1998.

Enter your date of birth below to find out how old you were on February 8th, 1998.
This information is not transmitted to our server.

Here are some fun statistics about February 8th, 1998.