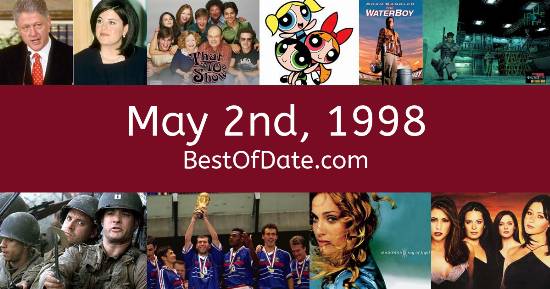 Songs that were on top of the music singles charts in the USA and the United Kingdom on May 2nd, 1998.

The date is May 2nd, 1998 and it's a Saturday. Anyone born today will have the star sign Taurus. Currently, people are enjoying their weekend.

The summer of 1998 has finally arrived. The weather has warmed up and the evenings are brighter than usual. In America, the song Too Close by Next is on top of the singles charts. Over in the UK, All That I Need by Boyzone is the number one hit song.

Bill Clinton is currently the President of the United States and the movie He Got Game is at the top of the Box Office. In the United Kingdom, Tony Blair is the current Prime Minister. Meanwhile, in technology news, CDs have become the dominant format for music. People are buying CD players and the portable CD players such as the "Discman". As a result, the older cassette tape format is continuing to decline in sales.

On TV, people are watching popular shows such as "Babylon 5", "Party of Five", "Hercules: The Legendary Journeys" and "Pinky and the Brain". Meanwhile, gamers are playing titles such as "Super Mario 64", "Oddworld: Abe's Oddysee", "Resident Evil 2" and "StarCraft". Children and teenagers are currently watching television shows such as "Tales from the Cryptkeeper", "Dexter's Laboratory", "Hey Arnold!" and "The Angry Beavers".

Popular toys at the moment include the likes of Yo-yo, Littlest Pet Shop, the Nintendo 64 and Spice Girls dolls.

Notable events that occurred around May 2nd, 1998.

If you are looking for some childhood nostalgia, then check out May 2nd, 2004 instead.

Historical weather information for May 2nd, 1998.

Bill Clinton was the President of the United States on May 2nd, 1998.

Tony Blair was the Prime Minister of the United Kingdom on May 2nd, 1998.

Enter your date of birth below to find out how old you were on May 2nd, 1998.