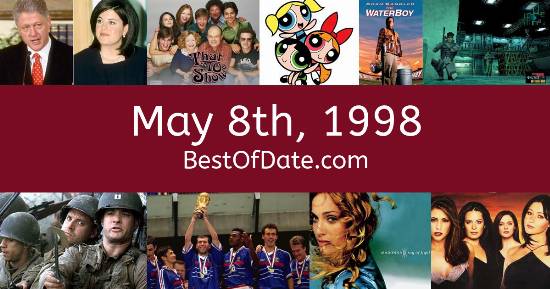 Songs that were on top of the music singles charts in the USA and the United Kingdom on May 8th, 1998.

The date is May 8th, 1998 and it's a Friday. Anyone born today will have the star sign Taurus. Currently, people have "that Friday feeling" and are looking forward to the weekend.

The summer of 1998 has finally arrived. The weather has warmed up and the evenings are brighter than usual. In America, the song Too Close by Next is on top of the singles charts. Over in the UK, Under The Bridge / Lady Marmalade by All Saints is the number one hit song.

Bill Clinton is currently the President of the United States and the movie He Got Game is at the top of the Box Office. In the United Kingdom, Tony Blair is the current Prime Minister. A new form of communication called "text messaging" is continuing to grow in popularity. However, it can only be done if both the sender and the receiver are on the same cell network.

The Clinton-Lewinsky sex scandal is receiving ongoing media attention. If you were to travel back to this day, notable figures such as Frank Sinatra, Phil Hartman, Big L and Stanley Kubrick would all be still alive. On TV, people are watching popular shows such as "Home Improvement", "Baywatch", "Sabrina, the Teenage Witch" and "Stargate SG-1".

Notable events that occurred around May 8th, 1998.

If you are looking for some childhood nostalgia, then check out May 8th, 2004 instead.

Historical weather information for May 8th, 1998.

Bill Clinton was the President of the United States on May 8th, 1998.

Tony Blair was the Prime Minister of the United Kingdom on May 8th, 1998.

Enter your date of birth below to find out how old you were on May 8th, 1998.