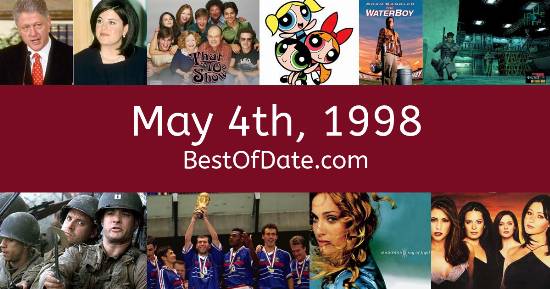 Songs that were on top of the music singles charts in the USA and the United Kingdom on May 4th, 1998.

The date is May 4th, 1998 and it's a Monday. Anyone born today will have the star sign Taurus. The summer of 1998 has finally arrived. The weather has warmed up and the evenings are brighter than usual.

In America, the song Too Close by Next is on top of the singles charts. Over in the UK, Under The Bridge / Lady Marmalade by All Saints is the number one hit song. Bill Clinton is currently the President of the United States and the movie He Got Game is at the top of the Box Office.

Kids and teenagers are watching TV shows such as "The Simpsons", "Blue's Clues", "Arthur" and "Bear in the Big Blue House". If you're a kid or a teenager, then you're probably playing with toys such as Sylvanian Families, Jenga, the Nintendo 64 and the Pokémon Trading Card Game.

Notable events that occurred around May 4th, 1998.

Historical weather information for May 4th, 1998.

Bill Clinton was the President of the United States on May 4th, 1998.

Tony Blair was the Prime Minister of the United Kingdom on May 4th, 1998.

Enter your date of birth below to find out how old you were on May 4th, 1998.

Leave a comment and tell everyone why May 4th, 1998 is important to you.