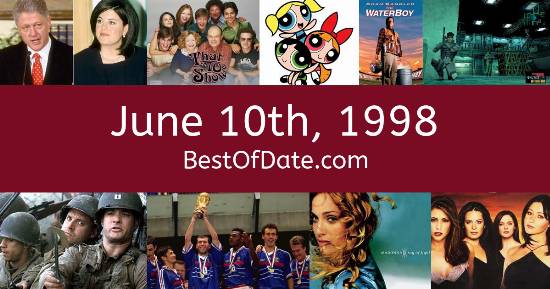 Songs that were on top of the music singles charts in the USA and the United Kingdom on June 10th, 1998.

The date is June 10th, 1998 and it's a Wednesday. Anyone born today will have the star sign Gemini. It's summer, so the temperatures are warmer and the evenings are longer than usual.

In America, the song The Boy Is Mine by Brandy & Monica is on top of the singles charts. Over in the UK, C'est La Vie by B*Witched is the number one hit song. Bill Clinton is currently the President of the United States and the movie Godzilla is at the top of the Box Office.

On TV, people are watching popular shows such as "Beverly Hills, 90210", "Mad About You", "Party of Five" and "Two Guys, a Girl and a Pizza Place". Meanwhile, gamers are playing titles such as "Super Mario 64", "Fallout", "1080° Snowboarding" and "World Cup 98". Kids and teenagers are watching TV shows such as "Dexter's Laboratory", "Arthur", "The Angry Beavers" and "Teen Angel".

If you're a kid or a teenager, then you're probably playing with toys such as Jenga, the PlayStation (PS1), the Nintendo 64 and Bop It.

If you are looking for some childhood nostalgia, then check out June 10th, 2004 instead.

Bill Clinton was the President of the United States on June 10th, 1998.

Tony Blair was the Prime Minister of the United Kingdom on June 10th, 1998.