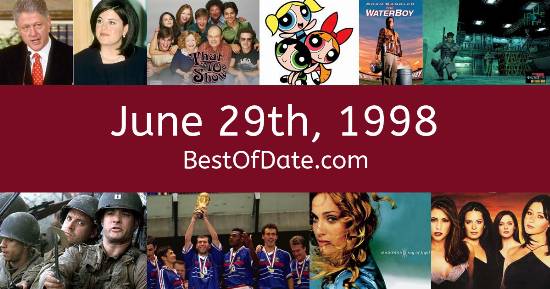 Songs that were on top of the music singles charts in the USA and the United Kingdom on June 29th, 1998.

The date is June 29th, 1998 and it's a Monday. Anyone born today will have the star sign Cancer. It's summer, so the temperatures are warmer and the evenings are longer than usual.

In America, the song The Boy Is Mine by Brandy & Monica is on top of the singles charts. Over in the UK, Three Lions '98 by Baddiel & Skinner & Lightning Seeds is the number one hit song. Bill Clinton is currently the President of the United States and the movie Doctor Dolittle is at the top of the Box Office.

In France, the 1998 FIFA World Cup is taking place. In celebrity news, Bruce Willis and Demi Moore have recently announced that they are separating after over 10 years of marriage. If you were to travel back to this day, notable figures such as Big L, Stanley Kubrick, Joe DiMaggio and Dana Plato would all be still alive.

On TV, people are watching popular shows such as "Star Trek: Deep Space Nine", "Sabrina, the Teenage Witch", "King of the Hill" and "CatDog". Meanwhile, gamers are playing titles such as "Star Wars: Shadows of the Empire", "PaRappa the Rapper", "Crash Bandicoot 2: Cortex Strikes Back" and "Diddy Kong Racing". Kids and teenagers are watching TV shows such as "Doug", "Kenan & Kel", "Teletubbies" and "Smart Guy".

Popular toys at the moment include the likes of Jenga, the PlayStation (PS1), the Tamagotchi and Spice Girls dolls.

CatDog
Animated show about conjoined siblings - a cat and a dog.

Clueless
TV show about a group of friends that live in the posh neighborhood of Beverly Hills.

If you are looking for some childhood nostalgia, then check out June 29th, 2004 instead.

Bill Clinton was the President of the United States on June 29th, 1998.

Tony Blair was the Prime Minister of the United Kingdom on June 29th, 1998.