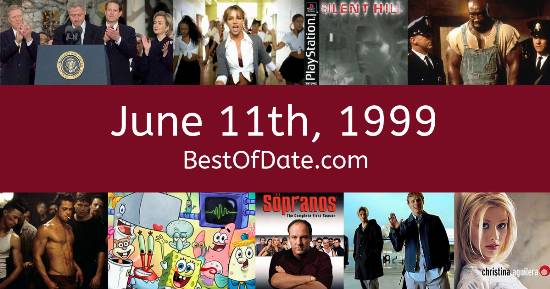 These songs were on top of the music charts in the United States and the United Kingdom on June 11th, 1999.

The movie "The Spy Who Shagged Me" was at the top of the Box Office on this day.

The date is June 11th, 1999, and it's a Friday. Anyone born today will have the star sign Gemini. Currently, people have "that Friday feeling" and are looking forward to the weekend.

It's summer, so the temperatures are warmer and the evenings are longer than usual. In America, the song Livin' La Vida Loca by Ricky Martin is on top of the singles charts. Over in the UK, Sweet Like Chocolate by Shanks & Bigfoot is the number one hit song.

Bill Clinton is currently the President of the United States, and the movie The Spy Who Shagged Me is at the top of the Box Office. In the United Kingdom, Tony Blair is the current Prime Minister. Meanwhile, CDs have become the dominant format for music. People are buying CD players and portable CD players such as the "Discman". As a result, the older cassette tape format is continuing to decline in sales.

The Nokia 3210 is currently one of the most popular cell phones on the market. If you were to travel back to this day, notable figures such as John F. Kennedy Jr., Walter Payton, Big Pun and Tom Landry would all be still alive. On TV, people are watching popular shows such as "Baywatch", "The X-Files", "The Nanny" and "Sex and the City".

Meanwhile, gamers are playing titles such as "Metal Gear Solid", "Mission Impossible", "Final Fantasy VIII" and "Ape Escape". Kids and teenagers are watching TV shows such as "Boy Meets World", "All That", "In the House" and "Mortal Kombat: Defenders of the Realm". Popular toys at the moment include the likes of Bop It, Spice Girls dolls, Gogo's Crazy Bones and Groovy Girls.

These are trending news stories and fads that were prevalent at this time. These are topics that would have been in the media on June 11th, 1999.

News stories and other events that happened around June 11th, 1999.

Check out our personality summary for people who were born on June 11th, 1999.

Television shows that people were watching in June, 1999.

Popular video games that people were playing in June of 1999.

If you are looking for some childhood nostalgia, then you should check out June 11th, 2005 instead.

Bill Clinton was the President of the United States on June 11th, 1999.

Tony Blair was the Prime Minister of the United Kingdom on June 11th, 1999.

Find out what your age was on June 11th, 1999, by entering your DOB below.
This information is not saved on our server.