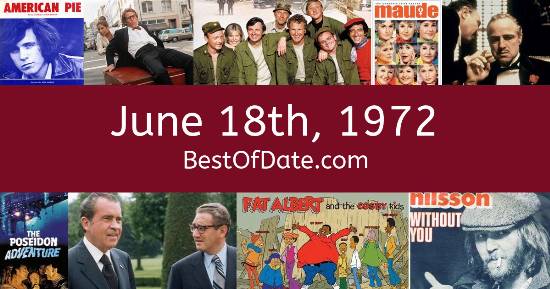 Songs that were on top of the music singles charts in the USA and the United Kingdom on June 18th, 1972.

The date is June 18th, 1972 and it's a Sunday. Anyone born today will have the star sign Gemini. Currently, people are enjoying their weekend.

Richard Nixon was the President of the United States on June 18th, 1972.

Edward Heath was the Prime Minister of the United Kingdom on June 18th, 1972.

Leave a comment and tell everyone why June 18th, 1972 is important to you.