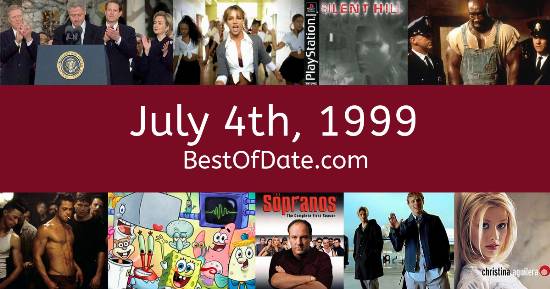 Songs that were on top of the music singles charts in the USA and the United Kingdom on July 4th, 1999.

The date is July 4th, 1999 and it's a Sunday. Anyone born today will have the star sign Cancer. Currently, people are enjoying their weekend.

America is celebrating the 4th of July, which means that fireworks are being set off and families are holding barbeques together. It's summer, so the temperatures are warmer and the evenings are longer than usual. In America, the song If You Had My Love by Jennifer Lopez is on top of the singles charts.

Over in the UK, Boom Boom Boom by Vengaboys is the number one hit song. Bill Clinton is currently the President of the United States and the movie Wild Wild West is at the top of the Box Office. In the United Kingdom, Tony Blair is the current Prime Minister.

It's 1999, so radio stations are being dominated by the likes of Cher, TLC, Monica, Whitney Houston, Britney Spears, Jennifer Lopez, Santana and Ricky Martin. The Nokia 3210 is currently one of the most popular cell phones on the market. Soccer star David Beckham and Spice Girls singer Victoria Adams (Posh Spice) have recently been married.

If you were to travel back to this day, notable figures such as John F. Kennedy Jr., Walter Payton, Big Pun and Tom Landry would all be still alive. On TV, people are watching popular shows such as "Walker, Texas Ranger", "CatDog", "Two Guys, a Girl and a Pizza Place" and "The King of Queens". Meanwhile, gamers are playing titles such as "Metal Gear Solid", "The Legend of Zelda: Ocarina of Time", "Final Fantasy VIII" and "Super Smash Bros.".

Kids and teenagers are watching TV shows such as "Moesha", "7th Heaven", "Dawson's Creek" and "CatDog". If you're a kid or a teenager, then you're probably playing with toys such as Jenga, Littlest Pet Shop, Spice Girls dolls and Furby.

If you are looking for some childhood nostalgia, then check out July 4th, 2005 instead.

Bill Clinton was the President of the United States on July 4th, 1999.

Tony Blair was the Prime Minister of the United Kingdom on July 4th, 1999.

Enter your date of birth below to find out how old you were on July 4th, 1999.

Here are some fun statistics about July 4th, 1999.