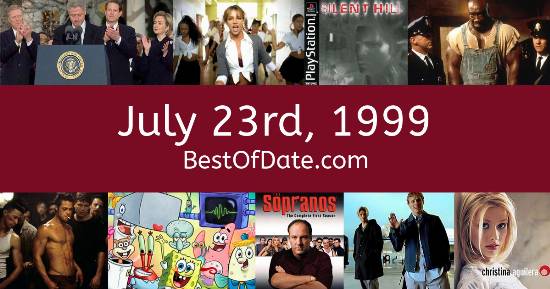 Songs that were on top of the music singles charts in the USA and the United Kingdom on July 23rd, 1999.

The date is July 23rd, 1999 and it's a Friday. Anyone born today will have the star sign Leo. Currently, people have "that Friday feeling" and are looking forward to the weekend.

It's summer, so the temperatures are warmer and the evenings are longer than usual. In America, the song Bills Bills Bills by Destiny's Child is on top of the singles charts. Over in the UK, Livin' La Vida Loca by Ricky Martin is the number one hit song.

Bill Clinton is currently the President of the United States and the movie The Haunting is at the top of the Box Office. In the United Kingdom, Tony Blair is the current Prime Minister. Meanwhile, in technology news, CDs have become the dominant format for music. People are buying CD players and the portable CD players such as the "Discman". As a result, the older cassette tape format is continuing to decline in sales.

J. K. Rowling has just published "Harry Potter and the Prisoner of Azkaban", which is her third novel in the Harry Potter series. People are saddened by the recent death of John F. Kennedy Jr., who died after his plane crashed off the west coast of Massachusetts. On TV, people are watching popular shows such as "3rd Rock from the Sun", "Beyond Belief: Fact or Fiction", "Sex and the City" and "The King of Queens".

Meanwhile, gamers are playing titles such as "Spyro the Dragon", "Silent Hill", "Counter-Strike" and "Dino Crisis". Children and teenagers are currently watching television shows such as "Blue's Clues", "USA High", "The Wild Thornberrys" and "Ed, Edd n Eddy". If you're a kid or a teenager, then you're probably playing with toys such as Jenga, Littlest Pet Shop, Bop It and Spice Girls dolls.

If you are looking for some childhood nostalgia, then check out July 23rd, 2005 instead.

Celebrities, historical figures and other notable people who were born on July 23rd.

National holidays and famous events that fall on the 23rd of July.

Bill Clinton was the President of the United States on July 23rd, 1999.

Tony Blair was the Prime Minister of the United Kingdom on July 23rd, 1999.