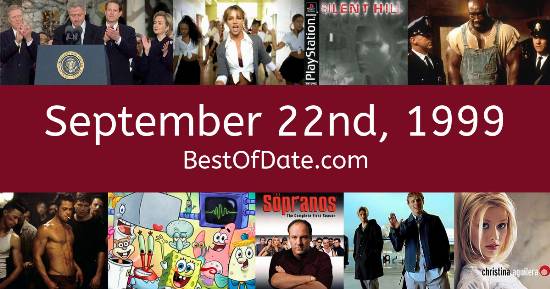 These songs were on top of the music charts in the United States and the United Kingdom on September 22nd, 1999.

The top "Box Office" movie on this date was the film "Blue Streak".

The date is September 22nd, 1999, and it's a Wednesday. Anyone born today will have the star sign Virgo. Schools and colleges are starting again and Autumn has officially arrived. As a result, temperatures are beginning to cool and trees are starting to shed their leaves.

The earthy smells of fall have started to fill the air. In America, the song Unpretty by TLC is on top of the singles charts. Over in the UK, We're Going To Ibiza by Vengaboys is the number one hit song.

Bill Clinton is currently the President of the United States, and the movie Blue Streak is at the top of the Box Office. In the United Kingdom, Tony Blair is the current Prime Minister. Meanwhile, CDs have become the dominant format for music. People are buying CD players and portable CD players such as the "Discman". As a result, the older cassette tape format is continuing to decline in sales.

The Nokia 3210 is currently one of the most popular cell phones on the market. If you were to travel back to this day, notable figures such as Walter Payton, Big Pun, Tom Landry and David Tomlinson would all be still alive. On TV, people are watching popular shows such as "Frasier", "Xena: Warrior Princess", "King of the Hill" and "That '70s Show".

Meanwhile, gamers are playing titles such as "Baldur's Gate", "Final Fantasy VIII", "Super Smash Bros." and "Legacy of Kain: Soul Reaver". Children and teenagers are currently watching television shows such as "All That", "Hey Arnold!", "USA High" and "The Powerpuff Girls". Popular toys at the moment include the likes of the PlayStation (PS1), Spice Girls dolls, Groovy Girls and the Dreamcast.

These are trending news stories and fads that were prevalent at this time. These are topics that would have been in the media on September 22nd, 1999.

Check out our personality summary for people who were born on September 22nd, 1999.

Television shows that people were watching in September, 1999.

Popular video games that people were playing in September of 1999.

If you are looking for some childhood nostalgia, then you should check out September 22nd, 2005 instead.

Bill Clinton was the President of the United States on September 22nd, 1999.

Tony Blair was the Prime Minister of the United Kingdom on September 22nd, 1999.

Enter your date of birth below to find out how old you were on September 22nd, 1999.
This information is not transmitted to our server.

Here are some fun statistics about September 22nd, 1999.