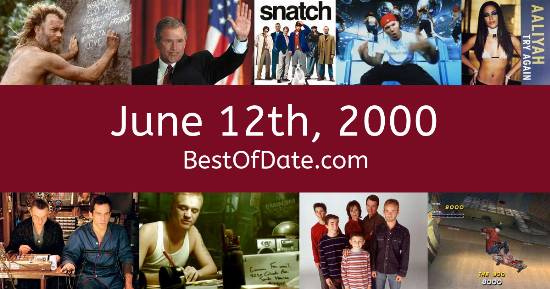 Songs that were on top of the music singles charts in the USA and the United Kingdom on June 12th, 2000:

The date is June 12th, 2000 and it's a Monday. Anyone born today will have the star sign Gemini. It's summer, so the temperatures are warmer and the evenings are longer than usual.

In America, the song Maria Maria by Santana is on top of the singles charts. Over in the UK, It Feels So Good by Sonique is the number one hit song. Bill Clinton is currently the President of the United States and the movie Gone in 60 Seconds is at the top of the Box Office.

Eminem has just released his best-selling album "The Marshall Mathers LP". UEFA Euro 2000 is currently taking place in Belgium and the Netherlands. People are watching popular TV shows such as "3rd Rock from the Sun", "Will & Grace", "Freaks and Geeks" and "Roswell".

Meanwhile, gamers are playing titles such as "Resident Evil 3: Nemesis", "Age of Empires II: The Age of Kings", "Grand Theft Auto 2" and "Unreal Tournament". Children and teenagers are currently watching television shows such as "Blue's Clues", "Hey Arnold!", "Rocket Power" and "Roswell". If you're a kid or a teenager, then you're probably playing with toys such as "Groovy Girls", "Game Boy Color", "Poo-Chi (robot dog)" and "Razor (scooter)".

Celebrities and historical figures that were born on the 12th of June:

Who was the Prime Minister of the United Kingdom on June 12th, 2000?

Looking for some nostalgia? Here are some Youtube videos relating to June 12th, 2000. Please note that videos are automatically selected by Youtube and that results may vary! Click on the "Load Next Video" button to view the next video in the search playlist. In many cases, you'll find episodes of old TV shows, documentaries, music videos and soap dramas.