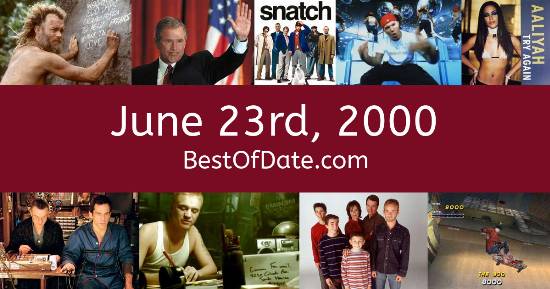 On June 23rd, 2000, the following songs were at the top of the music charts in the USA and the UK.

The top "Box Office" movie on this date was the film "Me, Myself and Irene".

The date is June 23rd, 2000, and it's a Friday. Anyone born today will have the star sign Cancer. Currently, people have "that Friday feeling" and are looking forward to the weekend.

It's summer, so the temperatures are warmer and the evenings are longer than usual. In America, the song Try Again by Aaliyah is on top of the singles charts. Over in the UK, It Feels So Good by Sonique is the number one hit song.

Bill Clinton is currently the President of the United States, and the movie Me, Myself and Irene is at the top of the Box Office. In the United Kingdom, Tony Blair is the current Prime Minister. A relatively new form of communication called "text messaging" is continuing to explode in popularity. Although the technology has been around since the mid-1990s, it was only recently that cell providers started to allow users to send SMS messages to people on different networks.

Eminem has just released his best-selling album "The Marshall Mathers LP". UEFA Euro 2000 is currently taking place in Belgium and the Netherlands. If you were to travel back to this day, notable figures such as David Tomlinson, Walter Matthau, Yokozuna and Dale Earnhardt would all be still alive.

On TV, people are watching popular shows such as "ER", "The King of Queens", "Becker" and "Malcolm in the Middle". Meanwhile, gamers are playing titles such as "Counter-Strike", "Dino Crisis", "WWF Attitude" and "Age of Empires II: The Age of Kings". Children and teenagers are currently watching television shows such as "The Simpsons", "Little Bear", "Kenan & Kel" and "Hey Arnold!".

Popular toys at the moment include the likes of Betty Spaghetty (doll), the Dreamcast, Poo-Chi (robot dog) and Razor (scooter).

These are trending news stories and fads that were prevalent at this time. These are topics that would have been in the media on June 23rd, 2000.

News stories and other events that happened around June 23rd, 2000.

Check out our personality summary for people who were born on June 23rd, 2000.

Television shows that people were watching in June, 2000.

Popular video games that people were playing in June of 2000.

If you are looking for some childhood nostalgia, then you should check out June 23rd, 2006 instead.

Bill Clinton was the President of the United States on June 23rd, 2000.

Tony Blair was the Prime Minister of the United Kingdom on June 23rd, 2000.

Find out what your age was on June 23rd, 2000, by entering your DOB below.
This information is not saved on our server.