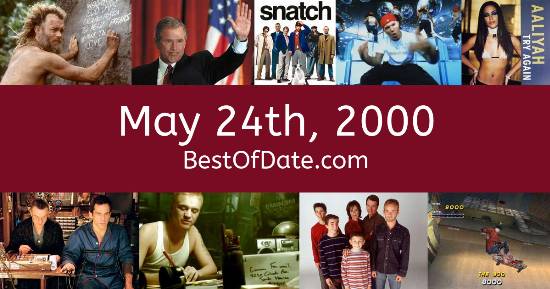 Songs that were on top of the music singles charts in the USA and the United Kingdom on May 24th, 2000:

The date is May 24th, 2000 and it's a Wednesday. Anyone born today will have the star sign Gemini. The summer of 2000 has finally arrived. The weather has warmed up and the evenings are brighter than usual.

In America, the song Maria Maria by Santana is on top of the singles charts. Over in the UK, Don't Call Me Baby by Madison Avenue is the number one hit song. Bill Clinton is currently the President of the United States and the movie Dinosaur is at the top of the Box Office.

Eminem has just released his best-selling album "The Marshall Mathers LP". Hugh Grant and Elizabeth Hurley have announced that they are ending their relationship. People are watching popular TV shows such as "King of the Hill", "Stargate SG-1", "CatDog" and "The West Wing".

Meanwhile, gamers are playing titles such as "Super Smash Bros.", "Resident Evil 3: Nemesis", "Donkey Kong 64" and "Dead or Alive 2". Children and teenagers are currently watching television shows such as "Dexter's Laboratory", "Blue's Clues", "Sabrina the Teenage Witch" and "Bear in the Big Blue House". If you're a kid or a teenager, then you're probably playing with toys such as "PlayStation (PS1)", "Groovy Girls", "The Dreamcast" and "Poo-Chi (robot dog)".

Notable events that occurred around May 24th, 2000:

Celebrities and historical figures that were born on the 24th of May:

Who was the Prime Minister of the United Kingdom on May 24th, 2000?

Looking for some nostalgia? Here are some Youtube videos relating to May 24th, 2000. Please note that videos are automatically selected by Youtube and that results may vary! Click on the "Load Next Video" button to view the next video in the search playlist. In many cases, you'll find episodes of old TV shows, documentaries, music videos and soap dramas.