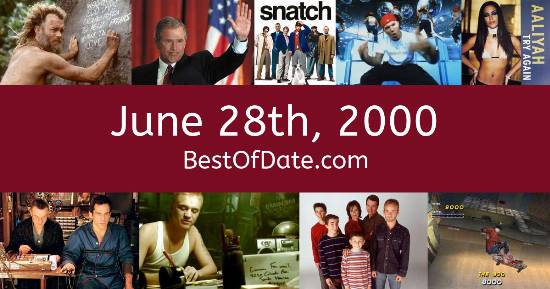 Songs that were on top of the music singles charts in the USA and the United Kingdom on June 28th, 2000.

My husband proposed to me on this day! And I actually remember going to see The Patriot a week or so later!
Posted on May 10th, 2021 05:27

The date is June 28th, 2000 and it's a Wednesday. Anyone born today will have the star sign Cancer. It's summer, so the temperatures are warmer and the evenings are longer than usual.

In America, the song Be With You by Enrique Iglesias is on top of the singles charts. Over in the UK, You See The Trouble With Me by Black Legend is the number one hit song. Bill Clinton is currently the President of the United States and the movie Me, Myself and Irene is at the top of the Box Office.

It's the year 2000, so the music charts are being dominated by the likes of Christina Aguilera, Faith Hill, Savage Garden, Destiny's Child, Santana, Sisqó, Creed, Aaliyah and Enrique Iglesias. Eminem has just released his best-selling album "The Marshall Mathers LP". UEFA Euro 2000 is currently taking place in Belgium and the Netherlands.

On TV, people are watching popular shows such as "JAG", "Dawson's Creek", "Two Guys, a Girl and a Pizza Place" and "Malcolm in the Middle". Meanwhile, gamers are playing titles such as "Tony Hawk's Pro Skater", "Resident Evil 3: Nemesis", "Grand Theft Auto 2" and "Deus Ex". Children and teenagers are currently watching television shows such as "Rugrats", "Pokemon", "Dora the Explorer" and "Malcolm in the Middle".

Popular toys at the moment include the likes of Groovy Girls, the Game Boy Color, the Dreamcast and Razor (scooter).

If you are looking for some childhood nostalgia, then check out June 28th, 2006 instead.

Bill Clinton was the President of the United States on June 28th, 2000.

Tony Blair was the Prime Minister of the United Kingdom on June 28th, 2000.