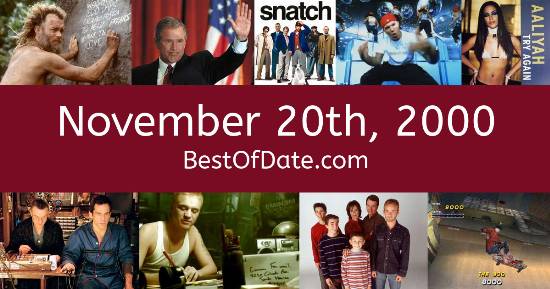 Songs that were on top of the music singles charts in the USA and the United Kingdom on November 20th, 2000.

The date is November 20th, 2000 and it's a Monday. Anyone born today will have the star sign Scorpio. In America, Thanksgiven Day of 2000 is just around the corner.

It's November, so the evenings are getting darker and the days are getting colder. In America, the song Independent Women Part 1 by Destiny's Child is on top of the singles charts. Over in the UK, Same Old Brand New You by A1 is the number one hit song.

Bill Clinton is currently the President of the United States and the movie Charlie's Angels is at the top of the Box Office. In the United Kingdom, Tony Blair is the current Prime Minister. A relatively new form of communication called "text messaging" is continuing to explode in popularity. Although the technology has been around since the mid-1990s, it was only recently that cell providers started to allow users to send SMS messages to people on different networks.

Sony have just released the PlayStation 2 video games console. In celebrity news, actor Michael Douglas and Catherine Zeta-Jones have married at the Plaza Hotel in New York. If you were to travel back to this day, notable figures such as Dale Earnhardt, Joey Ramone, Aaliyah and Thuy Trang would all be still alive.

On TV, people are watching popular shows such as "Buffy the Vampire Slayer", "The King of Queens", "Angel" and "Dark Angel". Meanwhile, gamers are playing titles such as "Mario Party", "Resident Evil - Code: Veronica", "Tenchu 2: Birth of the Stealth Assassins" and "The World Is Not Enough". Children and teenagers are currently watching television shows such as "Johnny Bravo", "Little Bear", "Bob the Builder" and "Roswell".

Popular toys at the moment include the likes of the Dreamcast, Razor (scooter), HitClips audio player and the PlayStation 2.

If you are looking for some childhood nostalgia, then check out November 20th, 2006 instead.

Bill Clinton was the President of the United States on November 20th, 2000.

Tony Blair was the Prime Minister of the United Kingdom on November 20th, 2000.

Enter your date of birth below to find out how old you were on November 20th, 2000.

Here are some fun statistics about November 20th, 2000.