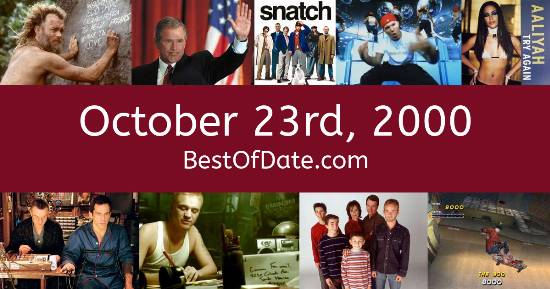 Songs that were on top of the music singles charts in the USA and the United Kingdom on October 23rd, 2000.

The movie "Remember the Titans" was at the top of the box office on October 23rd, 2000.

The date is October 23rd, 2000 and it's a Monday. Anyone born today will have the star sign Scorpio. The summer is long gone. Temperatures have started to become much cooler and the evenings are beginning to get darker.

Fallen leaves have carpeted driveways, lawns, pathways and sidewalks and there's a fresh earthy scent in the ear. Halloween of 2000 is quickly approaching and stores are selling costumes and decorations. In America, the song Come On Over Baby by Christina Aguilera is on top of the singles charts.

It's the year 2000, so the music charts are being dominated by the likes of Christina Aguilera, Faith Hill, Savage Garden, Destiny's Child, Santana, Sisqó, Creed, Aaliyah and Enrique Iglesias. The Nokia 3310 is one of the most popular cell phones on the market at the moment. Stores across the world are currently selling a wide range of custom covers for the phone. On TV, people are watching popular shows such as "JAG", "Sex and the City", "Jackass" and "Andromeda".

Meanwhile, gamers are playing titles such as "Ape Escape", "Donkey Kong 64", "Diablo II" and "Tony Hawk's Pro Skater 2". Children and teenagers are currently watching television shows such as "All That", "Dexter's Laboratory", "Bear in the Big Blue House" and "That '70s Show". If you're a kid or a teenager, then you're probably playing with toys such as Groovy Girls, the Dreamcast, Poo-Chi (robot dog) and Razor (scooter).

Celebrities, historical figures and notable people who were born on the 23rd of October.

Bill Clinton was the President of the United States on October 23rd, 2000.

Tony Blair was the Prime Minister of the United Kingdom on October 23rd, 2000.

Enter your date of birth below to find out how old you were on October 23rd, 2000.

Here are some fun statistics about October 23rd, 2000.

Leave a comment and tell everyone why October 23rd, 2000 is important to you.