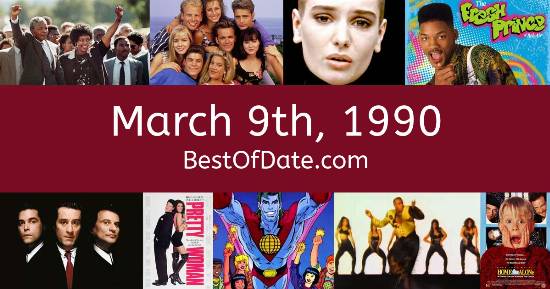 Songs that were on top of the music singles charts in the USA and the United Kingdom on March 9th, 1990.

The date is March 9th, 1990 and it's a Friday. Anyone born today will have the star sign Pisces. Currently, people have "that Friday feeling" and are looking forward to the weekend.

George W. Bush Snr. is currently the President of the United States and the movie Driving Miss Daisy is at the top of the Box Office. In the United Kingdom, Margaret Thatcher is the current Prime Minister. In fashion, many of the trends from the late 80s are still popular. Colored tights, denim overalls, leotards, flannel shirts and shoulder pads are all fashionable at the moment.

It's 1990, so the airwaves are being dominated by music artists such as Sinéad O'Connor, Paula Abdul, Janet Jackson, Vanilla Ice, Mariah Carey, Stevie B, Madonna and MC Hammer. Tributes are pouring in for American college basketball player Hank Gathers, who recently died after he collapsed during a game. Gathers was 23 years of age and had a heart condition. On TV, people are watching popular shows such as "Cheers", "Star Trek: The Next Generation", "The Wonder Years" and "Family Matters".

Meanwhile, gamers are playing titles such as "Duck Hunt", "Golden Axe", "Super Mario World" and "World Cup Italia '90". Kids and teenagers are watching TV shows such as "Danger Mouse", "Thomas the Tank Engine", "Adventures of the Little Koala" and "The Wonder Years". If you're a kid or a teenager, then you're probably playing with toys such as My Little Pony (figures), Popples, the Sega Genesis / Mega Drive and Yo-yo.

If you are looking for some childhood nostalgia, then check out March 9th, 1996 instead.

BTS member.
Born on March 9th, 1993
He was born exactly 3 years after this date.

George W. Bush Snr. was the President of the United States on March 9th, 1990.

Margaret Thatcher was the Prime Minister of the United Kingdom on March 9th, 1990.

Enter your date of birth below to find out how old you were on March 9th, 1990.

Here are some fun statistics about March 9th, 1990.