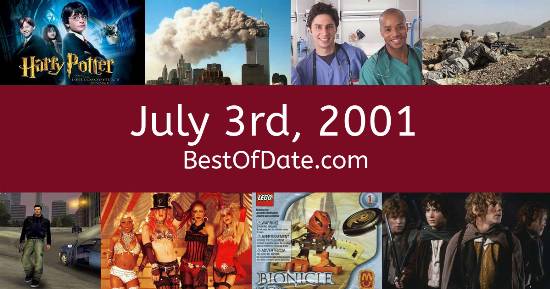 Songs that were on top of the music singles charts in the USA and the United Kingdom on July 3rd, 2001.

The movie "A.I. Artificial Intelligence" was at the top of the box office on July 3rd, 2001.

The date is July 3rd, 2001 and it's a Tuesday. Anyone born today will have the star sign Cancer. In America, the July 4th celebrations are fast approaching.

It's summer, so the temperatures are warmer and the evenings are longer than usual. In America, the song U Remind Me by Usher is on top of the singles charts. Over in the UK, The Way To Your Love by Hear'say is the number one hit song.

George W. Bush Jnr. is currently the President of the United States and the movie A.I. Artificial Intelligence is at the top of the Box Office. In the United Kingdom, Tony Blair is the current Prime Minister. In technology news, more and more music companies are beginning to release MP3 players. The new MP3 format means that music listeners are able to listen to multiple albums on the go.

On TV, people are watching popular shows such as "The X-Files", "Everybody Loves Raymond", "CatDog" and "The King of Queens". Meanwhile, gamers are playing titles such as "Colin McRae Rally 2.0", "Final Fantasy IX", "Spider-Man" and "Tony Hawk's Pro Skater 2". Children and teenagers are currently watching television shows such as "The Simpsons", "Recess", "The Powerpuff Girls" and "The Fairly OddParents".

Popular toys at the moment include the likes of Groovy Girls, Poo-Chi (robot dog), Razor (scooter) and Bratz (dolls).

If you are looking for some childhood nostalgia, then check out July 3rd, 2007 instead.

George W. Bush Jnr. was the President of the United States on July 3rd, 2001.

Tony Blair was the Prime Minister of the United Kingdom on July 3rd, 2001.

Enter your date of birth below to find out how old you were on July 3rd, 2001.

Here are some fun statistics about July 3rd, 2001.