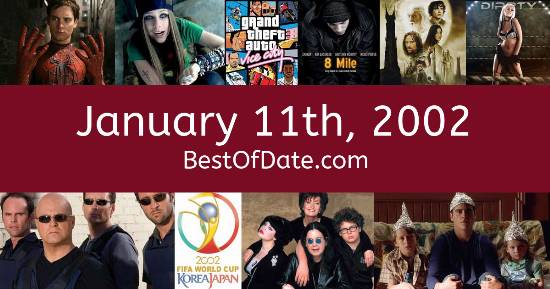 Songs that were on top of the music singles charts in the USA and the United Kingdom on January 11th, 2002.

The movie "The Lord of the Rings: The Fellowship of the Ring" was at the top of the box office on January 11th, 2002.

The date is January 11th, 2002 and it's a Friday. Anyone born today will have the star sign Capricorn. Currently, people have "that Friday feeling" and are looking forward to the weekend.

The Christmas holiday season is long over, the decorations have been taken down and a sense of normality has returned. In America, the song How You Remind Me by Nickelback is on top of the singles charts. Over in the UK, Gotta Get Thru This by Daniel Bedingfield is the number one hit song.

George W. Bush Jnr. is currently the President of the United States and the movie The Lord of the Rings: The Fellowship of the Ring is at the top of the Box Office. In the United Kingdom, Tony Blair is the current Prime Minister. Meanwhile, the Nokia 3310 is one of the most popular cell phones on the market at the moment. Stores across the world are currently selling a wide range of custom covers for the phone.

In technology news, more and more people are beginning to gain access to the Internet. Internet speeds are increasing and MP3 sharing is beginning to threaten the existence of music stores. In Europe, a new currency called the euro (€) has recently been introduced. A popular software program called LimeWire is currently being used by many people to share music, software and videos. It is also a haven for computer viruses.

It's 2002, so the music charts are being dominated by the likes of Ashanti, Nickelback, Nelly, Eminem, Usher, Blu Cantrell, The Calling, Linkin Park and Jennifer Lopez. On TV, people are watching popular shows such as "Touched by an Angel", "Buffy the Vampire Slayer", "Alias" and "24". Meanwhile, gamers are playing titles such as "Final Fantasy X", "Devil May Cry", "Grand Theft Auto III" and "Halo: Combat Evolved".

Children and teenagers are currently watching television shows such as "The Simpsons", "Friends", "CatDog" and "Dora the Explorer". Popular toys at the moment include the likes of Poo-Chi (robot dog), Razor (scooter), the PlayStation 2 and Nintendo GameCube.

Celebrities, historical figures and notable people who were born on the 11th of January.

George W. Bush Jnr. was the President of the United States on January 11th, 2002.

Tony Blair was the Prime Minister of the United Kingdom on January 11th, 2002.

Enter your date of birth below to find out how old you were on January 11th, 2002.

Here are some fun statistics about January 11th, 2002.