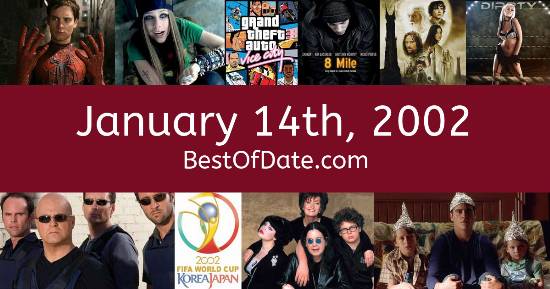 Songs that were on top of the music singles charts in the USA and the United Kingdom on January 14th, 2002.

The movie "The Lord of the Rings: The Fellowship of the Ring" was at the top of the box office on January 14th, 2002.

The date is January 14th, 2002 and it's a Monday. Anyone born today will have the star sign Capricorn. The Christmas holiday season is long over, the decorations have been taken down and a sense of normality has returned.

In America, the song U Got It Bad by Usher is on top of the singles charts. Over in the UK, More Than A Woman by Aaliyah is the number one hit song. George W. Bush Jnr. is currently the President of the United States and the movie The Lord of the Rings: The Fellowship of the Ring is at the top of the Box Office.

In Europe, a new currency called the euro (€) has recently been introduced. A popular software program called LimeWire is currently being used by many people to share music, software and videos. It is also a haven for computer viruses. It's 2002, so the music charts are being dominated by the likes of Ashanti, Nickelback, Nelly, Eminem, Usher, Blu Cantrell, The Calling, Linkin Park and Jennifer Lopez.

If you were to travel back to this day, notable figures such as Left Eye, The British Bulldog, John Gotti and Jam Master Jay would all be still alive. On TV, people are watching popular shows such as "The X-Files", "Buffy the Vampire Slayer", "The Sopranos" and "Jackass". Meanwhile, gamers are playing titles such as "Red Faction", "Gran Turismo 3: A-Spec", "Max Payne" and "Ace Combat 04: Shattered Skies".

Kids and teenagers are watching TV shows such as "Johnny Bravo", "Daria", "Bear in the Big Blue House" and "Ed, Edd n Eddy". Popular toys at the moment include the likes of Finger skateboards, Poo-Chi (robot dog), Razor (scooter) and the Game Boy Advance.

If you are looking for some childhood nostalgia, then check out January 14th, 2008 instead.

George W. Bush Jnr. was the President of the United States on January 14th, 2002.

Tony Blair was the Prime Minister of the United Kingdom on January 14th, 2002.

Enter your date of birth below to find out how old you were on January 14th, 2002.

Here are some fun statistics about January 14th, 2002.