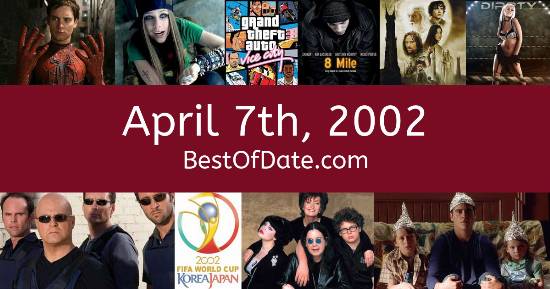 Songs that were on top of the music singles charts in the USA and the United Kingdom on April 7th, 2002:

The date is April 7th, 2002 and it's a Sunday. Anyone born today will have the star sign Aries. Currently, people are enjoying their weekend.

The summer of 2002 is drawing closer and temperatures have started to rise. In America, the song Ain't It Funny by Jennifer Lopez is on top of the singles charts. Over in the UK, Unchained Melody by Gareth Gates is the number one hit song.

George W. Bush Jnr. is currently the President of the United States and the movie Panic Room is at the top of the Box Office. In the United Kingdom, Tony Blair is the current Prime Minister. The Nokia 3310 is one of the most popular cell phones on the market at the moment. Stores across the world are currently selling a wide range of custom covers for the phone.

A popular software program called LimeWire is being used by many people to share MP3 files (and viruses). It's 2002, so the music charts are being dominated by the likes of Ashanti, Nickelback, Nelly, Eminem, Usher, Blu Cantrell, The Calling, Linkin Park and Jennifer Lopez. In celebrity news, actress Elizabeth Hurley has just given birth to a baby boy, who she has named Damian Charles Hurley. However, businessman Steve Bing is currently denying that he is the father.

Who was the Prime Minister of the United Kingdom on April 7th, 2002?

Enter your date of birth below to find out how old you were on April 7th, 2002.

Looking for some nostalgia? Here are some Youtube videos relating to April 7th, 2002. Please note that videos are automatically selected by Youtube and that results may vary! Click on the "Load Next Video" button to view the next video in the search playlist. In many cases, you'll find episodes of old TV shows, documentaries, music videos and soap dramas.

Here are some fun statistics about April 7th, 2002.