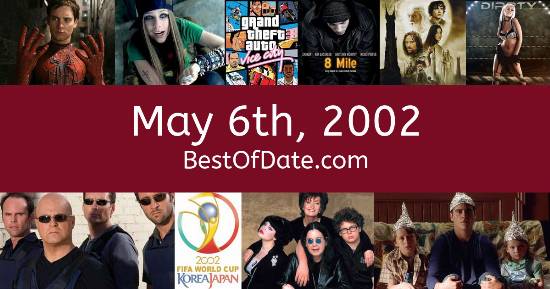 Songs that were on top of the music singles charts in the USA and the United Kingdom on May 6th, 2002.

The date is May 6th, 2002 and it's a Monday. Anyone born today will have the star sign Taurus. The summer of 2002 has finally arrived. The weather has warmed up and the evenings are brighter than usual.

In America, the song Foolish by Ashanti is on top of the singles charts. Over in the UK, Kiss Kiss by Holly Valance is the number one hit song. George W. Bush Jnr. is currently the President of the United States and the movie Scorpion King is at the top of the Box Office.

It's 2002, so the music charts are being dominated by the likes of Ashanti, Nickelback, Nelly, Eminem, Usher, Blu Cantrell, The Calling, Linkin Park and Jennifer Lopez. On TV, people are watching popular shows such as "Frasier", "Everybody Loves Raymond", "Roswell" and "The Amanda Show". Meanwhile, gamers are playing titles such as "Final Fantasy X", "Silent Hill 2", "Halo: Combat Evolved" and "WWF SmackDown! Just Bring It".

Kids and teenagers are watching TV shows such as "Bear in the Big Blue House", "Ed, Edd n Eddy", "SpongeBob SquarePants" and "Roswell". If you're a kid or a teenager, then you're probably playing with toys such as Groovy Girls, the PlayStation 2, Nintendo GameCube and Yu-Gi-Oh! Trading Card Game.

Notable events that occurred around May 6th, 2002.

Historical weather information for May 6th, 2002.

Tony Blair was the Prime Minister of the United Kingdom on May 6th, 2002.

Enter your date of birth below to find out how old you were on May 6th, 2002.

Leave a comment and tell everyone why May 6th, 2002 is important to you.