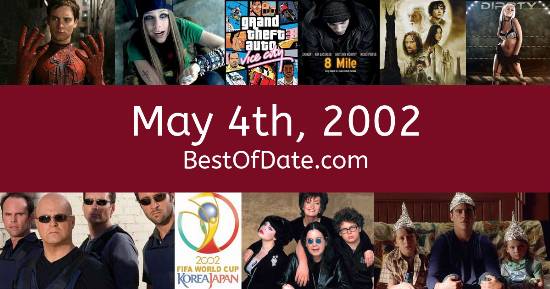 Songs that were on top of the music singles charts in the USA and the United Kingdom on May 4th, 2002.

The date is May 4th, 2002 and it's a Saturday. Anyone born today will have the star sign Taurus. Currently, people are enjoying their weekend.

The summer of 2002 has finally arrived. The weather has warmed up and the evenings are brighter than usual. In America, the song Foolish by Ashanti is on top of the singles charts. Over in the UK, Freak Like Me by Sugababes is the number one hit song.

George W. Bush Jnr. is currently the President of the United States and the movie Scorpion King is at the top of the Box Office. In the United Kingdom, Tony Blair is the current Prime Minister. The Nokia 3310 is one of the most popular cell phones on the market at the moment. Stores across the world are currently selling a wide range of custom covers for the phone.

A popular software program called LimeWire is being used by many people to share MP3 files (and viruses). It's 2002, so the music charts are being dominated by the likes of Ashanti, Nickelback, Nelly, Eminem, Usher, Blu Cantrell, The Calling, Linkin Park and Jennifer Lopez. On TV, people are watching popular shows such as "The Powerpuff Girls", "Futurama", "Roswell" and "The Office (UK version).".

Meanwhile, gamers are playing titles such as "Max Payne", "Devil May Cry", "Metal Gear Solid 2: Sons of Liberty" and "Medal of Honor: Allied Assault". Children and teenagers are currently watching television shows such as "SpongeBob SquarePants", "Rocket Power", "Malcolm in the Middle" and "The Fairly OddParents". Popular toys at the moment include the likes of Poo-Chi (robot dog), the PlayStation 2, Nintendo GameCube and Yu-Gi-Oh! Trading Card Game.

Notable events that occurred around May 4th, 2002.

Historical weather information for May 4th, 2002.

Tony Blair was the Prime Minister of the United Kingdom on May 4th, 2002.

Enter your date of birth below to find out how old you were on May 4th, 2002.

Leave a comment and tell everyone why May 4th, 2002 is important to you.