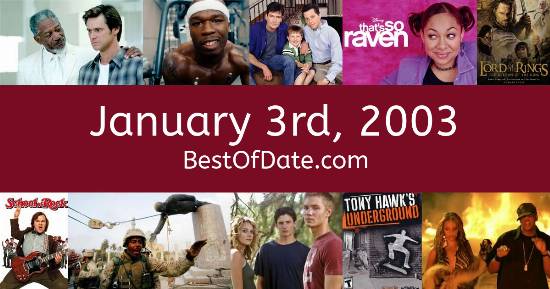 Songs that were on top of the music singles charts in the USA and the United Kingdom on January 3rd, 2003.

The movie "The Lord of the Rings: The Two Towers" was at the top of the Box Office on January 3rd, 2003.

The date is January 3rd, 2003, and it's a Friday. Anyone born today will have the star sign Capricorn. Currently, people have "that Friday feeling" and are looking forward to the weekend.

People are starting to return back to work and school after the Christmas holidays. In America, the song Lose Yourself by Eminem is on top of the singles charts. Over in the UK, Sound Of The Underground by Girls Aloud is the number one hit song.

George W. Bush Jnr. is currently the President of the United States, and the movie The Lord of the Rings: The Two Towers is at the top of the Box Office. In the United Kingdom, Tony Blair is the current Prime Minister. In technology news, more and more people are beginning to gain access to the Internet. Internet speeds are increasing and MP3 sharing is beginning to threaten the existence of music stores.

A popular software program called LimeWire is currently being used by many people to share music, software and videos. It is also a haven for computer viruses. "The Lord of the Rings: The Two Towers" is currently being played in movie theaters. Cameras on phones are beginning to become more and more popular. Although the photographs that they take are still lacking in quality.

It's 2003, so the music charts are being dominated by the likes of 50 Cent, R. Kelly, Sean Paul, 3 Doors Down, Nelly, Evanescence, Chingy and Beyonce. If you were to travel back to this day, notable figures such as Lana Clarkson, Curt Hennig, Fred Rogers and Barry White would all be still alive. On TV, people are watching popular shows such as "Last of the Summer Wine", "King of the Hill", "Andromeda" and "Without a Trace".

Meanwhile, gamers are playing titles such as "RuneScape", "Battlefield 1942", "Medieval: Total War" and "Grand Theft Auto: Vice City". Kids and teenagers are watching TV shows such as "CatDog", "Dora the Explorer", "Static Shock" and "My Wife and Kids". If you're a kid or a teenager, then you're probably playing with toys such as Gogo's Crazy Bones, Finger skateboards, HitClips audio player and Yu-Gi-Oh! Trading Card Game.

These are trending news stories and fads that were prevalent at this time. These are topics that would have been in the media on January 3rd, 2003.

News stories and other events that happened around January 3rd, 2003.

Check out our personality summary for people who were born on January 3rd, 2003.

Television shows that people were watching in January, 2003.

Popular video games that people were playing in January of 2003.

If you are looking for some childhood nostalgia, then you should check out January 3rd, 2009 instead.

George W. Bush Jnr. was the President of the United States on January 3rd, 2003.

Tony Blair was the Prime Minister of the United Kingdom on January 3rd, 2003.

Find out what your age was on January 3rd, 2003, by entering your DOB below.
This information is not saved on our server.

Here are some fun statistics about January 3rd, 2003.