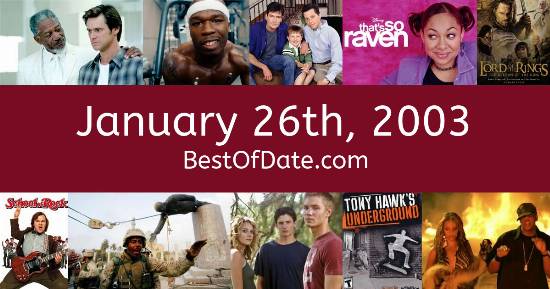 Songs that were on top of the music singles charts in the USA and the United Kingdom on January 26th, 2003.

The date is January 26th, 2003 and it's a Sunday. Anyone born today will have the star sign Aquarius. Currently, people are enjoying their weekend.

In America, the song Lose Yourself by Eminem is on top of the singles charts. Over in the UK, Stop Living The Lie by David Sneddon is the number one hit song. George W. Bush Jnr. is currently the President of the United States and the movie Darkness Falls is at the top of the Box Office.

On TV, people are watching popular shows such as "ER", "Everybody Loves Raymond", "That '70s Show" and "That's So Raven". Meanwhile, gamers are playing titles such as "Battlefield 1942", "Mafia: The City of Lost Heaven", "Grand Theft Auto: Vice City" and "Tom Clancy's Splinter Cell". Kids and teenagers are watching TV shows such as "Bear in the Big Blue House", "The Wild Thornberrys", "Grounded for Life" and "That's So Raven".

Popular toys at the moment include the likes of the PlayStation 2, Bratz (dolls), Yu-Gi-Oh! Trading Card Game and Beyblades (spinning top toys).

George W. Bush Jnr. was the President of the United States on January 26th, 2003.

Tony Blair was the Prime Minister of the United Kingdom on January 26th, 2003.

Enter your date of birth below to find out how old you were on January 26th, 2003.

Here are some fun statistics about January 26th, 2003.

Leave a comment and tell everyone why January 26th, 2003 is important to you.