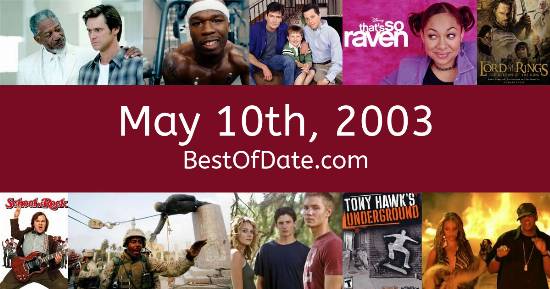 Songs that were on top of the music singles charts in the USA and the United Kingdom on May 10th, 2003.

The date is May 10th, 2003 and it's a Saturday. Anyone born today will have the star sign Taurus. Currently, people are enjoying their weekend.

The summer of 2003 has finally arrived. The weather has warmed up and the evenings are brighter than usual. In America, the song Get Busy by Sean Paul is on top of the singles charts. Over in the UK, Loneliness by Tom Craft is the number one hit song.

George W. Bush Jnr. is currently the President of the United States and the movie X2: X-Men United is at the top of the Box Office. In the United Kingdom, Tony Blair is the current Prime Minister. In technology news, more and more people are beginning to gain access to the Internet. Internet speeds are increasing and MP3 sharing is beginning to threaten the existence of music stores.

If you were to travel back to this day, notable figures such as Barry White, Bob Hope, Charles Bronson and John Ritter would all be still alive. On TV, people are watching popular shows such as "Sex and the City", "Star Trek: Enterprise", "Alias" and "Without a Trace". Meanwhile, gamers are playing titles such as "RuneScape", "Kingdom Hearts", "Medieval: Total War" and "Unreal Tournament 2003".

Children and teenagers are currently watching television shows such as "Bear in the Big Blue House", "That '70s Show", "The Fairly OddParents" and "That's So Raven". Popular toys at the moment include the likes of Gogo's Crazy Bones, Betty Spaghetty (doll), the PlayStation 2 and the Nintendo GameCube.

Notable events that occurred around May 10th, 2003.

If you are looking for some childhood nostalgia, then check out May 10th, 2009 instead.

Historical weather information for May 10th, 2003.

Tony Blair was the Prime Minister of the United Kingdom on May 10th, 2003.