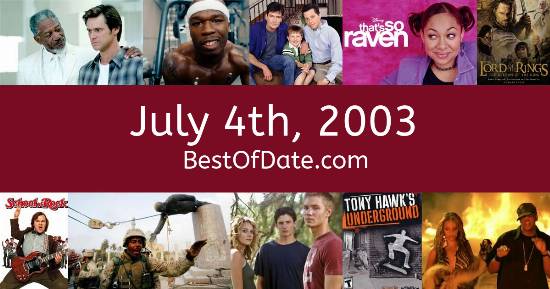 Songs that were on top of the music singles charts in the USA and the United Kingdom on July 4th, 2003.

The date is July 4th, 2003 and it's a Friday. Anyone born today will have the star sign Cancer. Currently, people have "that Friday feeling" and are looking forward to the weekend.

America is celebrating the 4th of July, which means that fireworks are being set off and families are holding barbeques together. It's summer, so the temperatures are warmer and the evenings are longer than usual. In America, the song This Is The Night by Clay Aiken is on top of the singles charts.

Over in the UK, Bring Me To Life by Evanescence is the number one hit song. George W. Bush Jnr. is currently the President of the United States and the movie Terminator 3 is at the top of the Box Office. In the United Kingdom, Tony Blair is the current Prime Minister.

It's 2003, so the music charts are being dominated by the likes of 50 Cent, R. Kelly, Sean Paul, 3 Doors Down, Nelly, Evanescence, Chingy and Beyonce. On TV, people are watching popular shows such as "7th Heaven", "Everybody Loves Raymond", "The Wild Thornberrys" and "24". Meanwhile, gamers are playing titles such as "Mafia: The City of Lost Heaven", "Animal Crossing", "Grand Theft Auto: Vice City" and "Tom Clancy's Splinter Cell".

Kids and teenagers are watching TV shows such as "7th Heaven", "CatDog", "The Wild Thornberrys" and "Jimmy Neutron". Popular toys at the moment include the likes of the PlayStation 2, Nintendo GameCube, Yu-Gi-Oh! Trading Card Game and Beyblades (spinning top toys).

If you are looking for some childhood nostalgia, then check out July 4th, 2009 instead.

Celebrities, historical figures and notable people who were born on the 4th of July.

George W. Bush Jnr. was the President of the United States on July 4th, 2003.

Tony Blair was the Prime Minister of the United Kingdom on July 4th, 2003.

Enter your date of birth below to find out how old you were on July 4th, 2003.

Here are some fun statistics about July 4th, 2003.