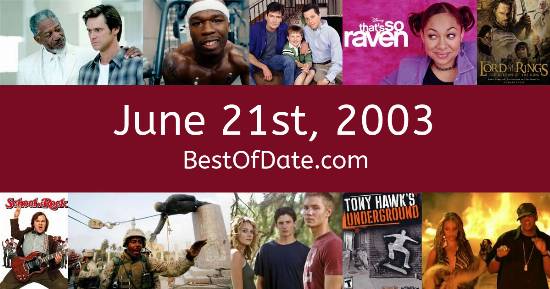 Songs that were on top of the music singles charts in the USA and the United Kingdom on June 21st, 2003.

The date is June 21st, 2003 and it's a Saturday. Anyone born today will have the star sign Cancer. Currently, people are enjoying their weekend.

George W. Bush Jnr. is currently the President of the United States and the movie Hulk is at the top of the Box Office. In the United Kingdom, Tony Blair is the current Prime Minister. A popular software program called LimeWire is being used by many people to share MP3 files (and viruses).

It's 2003, so the music charts are being dominated by the likes of 50 Cent, R. Kelly, Sean Paul, 3 Doors Down, Nelly, Evanescence, Chingy and Beyonce. On TV, people are watching popular shows such as "7th Heaven", "Futurama", "The West Wing" and "Dora the Explorer". Meanwhile, gamers are playing titles such as "Battlefield 1942", "Mafia: The City of Lost Heaven", "Grand Theft Auto: Vice City" and "Tom Clancy's Splinter Cell".

Children and teenagers are currently watching television shows such as "Rugrats", "Dexter's Laboratory", "Bear in the Big Blue House" and "My Wife and Kids". If you're a kid or a teenager, then you're probably playing with toys such as the PlayStation 2, Bratz (dolls), Nintendo GameCube and Yu-Gi-Oh! Trading Card Game.

Tony Blair was the Prime Minister of the United Kingdom on June 21st, 2003.

Leave a comment and tell everyone why June 21st, 2003 is important to you.