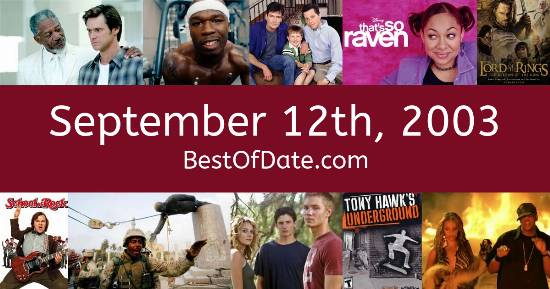 Songs that were on top of the music singles charts in the USA and the United Kingdom on September 12th, 2003.

The date is September 12th, 2003 and it's a Friday. Anyone born today will have the star sign Virgo. Currently, people have "that Friday feeling" and are looking forward to the weekend.

Schools have started back and autumn has arrived, so temperatures have started to cool and trees are beginning to shed their leaves. In America, the song Shake Ya Tailfeather by Nelly & P. Diddy is on top of the singles charts. Over in the UK, Where Is The Love by Black Eyed Peas is the number one hit song.

Internet users are using MSN Messenger to chat with each other online. A flash animation of badgers singing "badger, badger, badger" has become extremely popular on the Internet. The animation, which loops indefinitely, was published by British animator Jonti Picking in September, 2003. On TV, people are watching popular shows such as "Frasier", "Futurama", "The West Wing" and "Punk'd".

Meanwhile, gamers are playing titles such as "Animal Crossing", "Grand Theft Auto: Vice City", "Tom Clancy's Splinter Cell" and "Star Wars: Knights of the Old Republic". Children and teenagers are currently watching television shows such as "CatDog", "The Wild Thornberrys", "The Powerpuff Girls" and "SpongeBob SquarePants". Popular toys at the moment include the likes of the PlayStation 2, Bratz (dolls), Nintendo GameCube and Yu-Gi-Oh! Trading Card Game.

If you are looking for some childhood nostalgia, then check out September 12th, 2009 instead.

George W. Bush Jnr. was the President of the United States on September 12th, 2003.

Tony Blair was the Prime Minister of the United Kingdom on September 12th, 2003.

Enter your date of birth below to find out how old you were on September 12th, 2003.

Here are some fun statistics about September 12th, 2003.