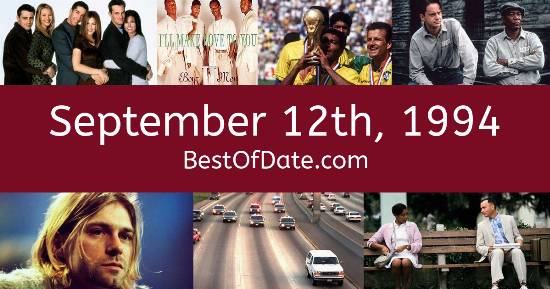 Songs that were on top of the music singles charts in the USA and the United Kingdom on September 12th, 1994.

The date is September 12th, 1994 and it's a Monday. Anyone born today will have the star sign Virgo. Schools and colleges are starting again and Autumn has officially arrived. As a result, temperatures are beginning to cool and trees are starting to shed their leaves.

In America, the song I'll Make Love To You by Boyz II Men is on top of the singles charts. Over in the UK, Love Is All Around by Wet Wet Wet is the number one hit song. Bill Clinton is currently the President of the United States and the movie Forrest Gump is at the top of the Box Office.

In Europe, a war is continuing to rage on in Bosnia and Herzegovina. A new catchy song called "Saturday Night" has been released by Danish eurodance artist Whigfield. The song is currently receiving constant airplay on radio stations. In music news, Aerosmith's "Cryin" has recently won Video of the Year at the 1994 MTV Video Music Awards.

In the United States, 132 people have tragically lost their lives after USAir Flight 427 crashed during its approach towards a runway in Pittsburgh. On television, a new animated children's show called "The Magic School Bus" has recently been aired for the first time. Tributes are currently pouring in for English-American actress Jessica Tandy, who has passed away at the age of 85. Recently, Tandy had starred in movies such as Driving Miss Daisy (1989) and Fried Green Tomatoes (1991).

In what can only be described as a bizarre event, a man called Frank Eugene Corder has died after crashing his stolen two-seater airplane onto the South Lawn of the White House. If you were to travel back to this day, notable figures such as Raul Julia, Eazy E, Selena and Bob Ross would all be still alive. On TV, people are watching popular shows such as "Only Fools and Horses", "Murder, She Wrote", "One Foot in the Grave" and "Lois & Clark: The New Adventures of Superman".

Meanwhile, gamers are playing titles such as "Mortal Kombat", "Tiny Toon Adventures 2: Trouble in Wackyland", "Gunstar Heroes" and "Sonic Spinball". Kids and teenagers are watching TV shows such as "The Simpsons", "Art Attack", "Clarissa Explains It All" and "The Nanny". If you're a kid or a teenager, then you're probably playing with toys such as Polly Pocket, Teen Talk Barbie, Littlest Pet Shop and Jurassic Park: Young Tyrannosaurus Rex.

If you are looking for some childhood nostalgia, then check out September 12th, 2000 instead.

Bill Clinton was the President of the United States on September 12th, 1994.

John Major was the Prime Minister of the United Kingdom on September 12th, 1994.

Enter your date of birth below to find out how old you were on September 12th, 1994.

Here are some fun statistics about September 12th, 1994.