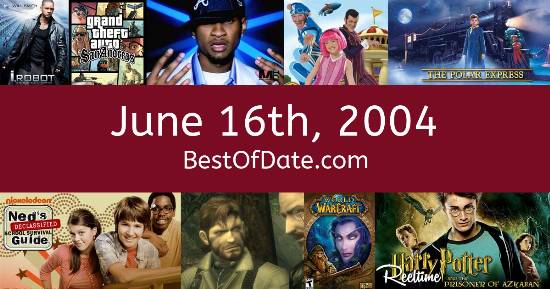 These songs were on top of the music charts in the United States and the United Kingdom on June 16th, 2004.

The movie "Harry Potter and the Prisoner of Azkaban" was at the top of the Box Office on this day.

The date is June 16th, 2004, and it's a Wednesday. Anyone born today will have the star sign Gemini. It's summer, so the temperatures are warmer and the evenings are longer than usual.

In America, the song Burn by Usher is on top of the singles charts. Over in the UK, I Don't Wanna Know by Mario Wynans & Enya is the number one hit song. George W. Bush Jnr. is currently the President of the United States, and the movie Harry Potter and the Prisoner of Azkaban is at the top of the Box Office.

In Portugal, UEFA Euro 2004 is taking place. If you were to travel back to this day, notable figures such as Marlon Brando, Rick James, Big Boss Man and ODB would all be still alive. On TV, people are watching popular shows such as "Charmed", "The Wire", "The O.C." and "Deadwood".

Meanwhile, gamers are playing titles such as "Championship Manager 4", "Prince of Persia: The Sands of Time", "Beyond Good & Evil" and "Max Payne 2: The Fall of Max Payne". Kids and teenagers are watching TV shows such as "Bear in the Big Blue House", "Ed, Edd n Eddy", "Grizzly Tales for Gruesome Kids" and "Grounded for Life". Popular toys at the moment include the likes of the PlayStation 2, Bratz dolls, the Xbox and RoboSapien (toy robot).

These are trending news stories and fads that were prevalent at this time. These are topics that would have been in the media on June 16th, 2004.

Check out our personality summary for people who were born on June 16th, 2004.

Television shows that people were watching in June, 2004.

Popular video games that people were playing in June of 2004.

If you are looking for some childhood nostalgia, then you should check out June 16th, 2010 instead.

Tony Blair was the Prime Minister of the United Kingdom on June 16th, 2004.

Enter your date of birth below to find out how old you were on June 16th, 2004.
This information is not transmitted to our server.