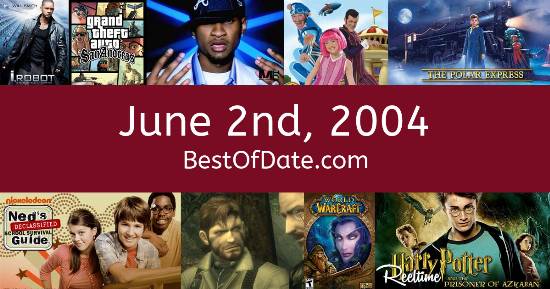 Songs that were on top of the music singles charts in the USA and the United Kingdom on June 2nd, 2004.

The date is June 2nd, 2004 and it's a Wednesday. Anyone born today will have the star sign Gemini. It's summer, so the temperatures are warmer and the evenings are longer than usual.

In America, the song Burn by Usher is on top of the singles charts. Over in the UK, F.U.R.B. by Frankee is the number one hit song. George W. Bush Jnr. is currently the President of the United States and the movie Shrek 2 is at the top of the Box Office.

On TV, people are watching popular shows such as "7th Heaven", "The Wild Thornberrys", "The Wire" and "Extreme Makeover: Home Edition". Meanwhile, gamers are playing titles such as "The Simpsons Hit & Run", "Call of Duty", "Need for Speed: Underground" and "Manhunt". Kids and teenagers are watching TV shows such as "Ed, Edd n Eddy", "The Fairly OddParents", "My Life as a Teenage Robot" and "Peppa Pig".

If you're a kid or a teenager, then you're probably playing with toys such as the PlayStation 2, Yu-Gi-Oh! Trading Card Game, Beyblades (spinning top toys) and RoboSapien (toy robot).

If you are looking for some childhood nostalgia, then check out June 2nd, 2010 instead.

George W. Bush Jnr. was the President of the United States on June 2nd, 2004.

Tony Blair was the Prime Minister of the United Kingdom on June 2nd, 2004.

Enter your date of birth below to find out how old you were on June 2nd, 2004.

Here are some fun statistics about June 2nd, 2004.