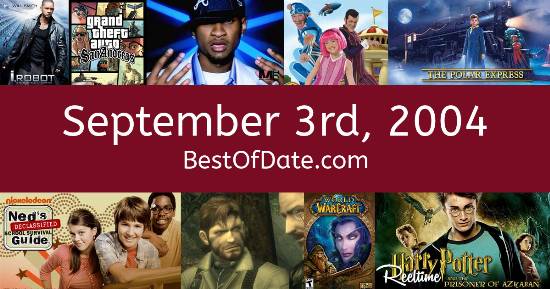 Songs that were on top of the music singles charts in the USA and the United Kingdom on September 3rd, 2004.

The date is September 3rd, 2004, and it's a Friday. Anyone born today will have the star sign Virgo. Currently, people have "that Friday feeling" and are looking forward to the weekend.

Schools and colleges are starting again and Autumn has officially arrived. As a result, temperatures are beginning to cool and trees are starting to shed their leaves. In the United States, it is the Friday before Labor Day weekend and many Americans are planning barbecues and other gatherings. In America, the song Lean Back by Terror Squad is on top of the singles charts.

Over in the UK, These Words by Natasha Bedingfield is the number one hit song. George W. Bush Jnr. is currently the President of the United States, and the movie Hero is at the top of the Box Office. In the United Kingdom, Tony Blair is the current Prime Minister.

Internet users are using MSN Messenger to chat with each other online. It's 2004, so the music charts are being dominated by the likes of Usher, Alicia Keys, Maroon 5, OutKast, Mario Winans, the Terror Squad and Ciara. Tragedy has struck Russia, as Islamic militants take over a school in Beslan, Russia. The siege comes to an end on the 3rd of September, with 334 people losing their lives.

If you were to travel back to this day, notable figures such as Big Boss Man, ODB, Dimebag Darrell and Johnnie Cochran would all be still alive. On TV, people are watching popular shows such as "King of the Hill", "Stargate SG-1", "The Wire" and "Punk'd". Meanwhile, gamers are playing titles such as "Beyond Good & Evil", "Manhunt", "Max Payne 2: The Fall of Max Payne" and "Rome: Total War".

Children and teenagers are currently watching television shows such as "That '70s Show", "Grizzly Tales for Gruesome Kids", "Grounded for Life" and "My Life as a Teenage Robot". If you're a kid or a teenager, then you're probably playing with toys such as HitClips audio player, Yu-Gi-Oh! Trading Card Game, Beyblades (spinning top toys) and VideoNow (portable player).

These are trending news stories and fads that were prevalent at this time. These are topics that would have been in the media on September 3rd, 2004.

News stories and other events that happened around September 3rd, 2004.

Check out our personality summary for people who were born on September 3rd, 2004.

If you are looking for some childhood nostalgia, then you should check out September 3rd, 2010 instead.

Celebrities, historical figures and other notable people who were born on September 3rd.

George W. Bush Jnr. was the President of the United States on September 3rd, 2004.

Tony Blair was the Prime Minister of the United Kingdom on September 3rd, 2004.

Find out what your age was on September 3rd, 2004, by entering your DOB below.
This information is not saved on our server.

Here are some fun statistics about September 3rd, 2004.