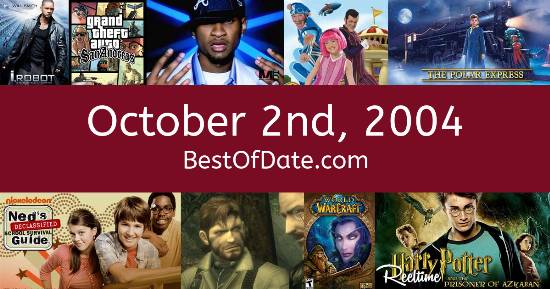 Songs that were on top of the music singles charts in the USA and the United Kingdom on October 2nd, 2004.

The movie "The Forgotten" was at the top of the Box Office on October 2nd, 2004.

The date is October 2nd, 2004, and it's a Saturday. Anyone born today will have the star sign Libra. Currently, people are enjoying their weekend.

On TV, people are watching popular shows such as "Last of the Summer Wine", "The King of Queens", "Andromeda" and "The Wire". Meanwhile, gamers are playing titles such as "Warcraft III: The Frozen Throne", "Soulcalibur II", "Call of Duty" and "Beyond Good & Evil". Kids and teenagers are watching TV shows such as "Dora the Explorer", "Kim Possible", "Veronica Mars" and "Laguna Beach: The Real Orange County".

These are trending news stories and fads that were prevalent at this time. These are topics that would have been in the media on October 2nd, 2004.

Check out our personality summary for people who were born on October 2nd, 2004.

If you are looking for some childhood nostalgia, then you should check out October 2nd, 2010 instead.

Wrestler. Deceased
Born on October 2nd, 1966
He was not alive on this date.

George W. Bush Jnr. was the President of the United States on October 2nd, 2004.

Tony Blair was the Prime Minister of the United Kingdom on October 2nd, 2004.

Enter your date of birth below to find out how old you were on October 2nd, 2004.
This information is not transmitted to our server.

Here are some fun statistics about October 2nd, 2004.