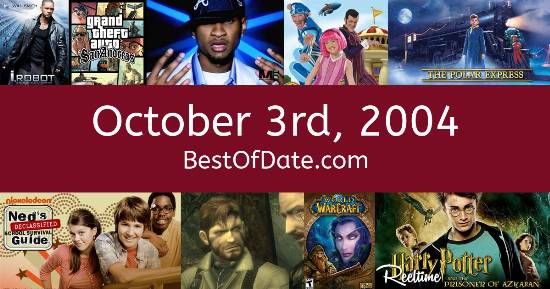 October 3rd, 2004 relates to a fictional event in a movie, book, game or television series.

Songs that were on top of the music singles charts in the USA and the United Kingdom on October 3rd, 2004.

The movie "The Forgotten" was at the top of the Box Office on October 3rd, 2004.

The following comments about October 3rd, 2004 were written by our visitors.

Desperate Housewives was one of the biggest shows of the mid-2000s. Whenever I watch an episode, I think of my final years in high school.
Posted on November 10th, 2021 08:32

The actor who players Will Byers in Stranger Things (Noah Schnapp) was born on this date.
Posted on June 13th, 2022 16:14

The date is October 3rd, 2004, and it's a Sunday. Anyone born today will have the star sign Libra. Currently, people are enjoying their weekend.

On TV, people are watching popular shows such as "Stargate SG-1", "Andromeda", "Cold Case" and "Pimp My Ride". Meanwhile, gamers are playing titles such as "Castlevania: Aria of Sorrow", "Soulcalibur II", "Ratchet & Clank: Going Commando" and "Beyond Good & Evil". Children and teenagers are currently watching television shows such as "SpongeBob SquarePants", "The Cramp Twins", "Teen Titans" and "One Tree Hill".

These are trending news stories and fads that were prevalent at this time. These are topics that would have been in the media on October 3rd, 2004.

News stories and other events that happened around October 3rd, 2004.

Check out our personality summary for people who were born on October 3rd, 2004.

If you are looking for some childhood nostalgia, then you should check out October 3rd, 2010 instead.

Musician. Deceased
Born on October 3rd, 1954
He was not alive on this date.

George W. Bush Jnr. was the President of the United States on October 3rd, 2004.

Tony Blair was the Prime Minister of the United Kingdom on October 3rd, 2004.

Find out what your age was on October 3rd, 2004, by entering your DOB below.
This information is not saved on our server.

Here are some fun statistics about October 3rd, 2004.