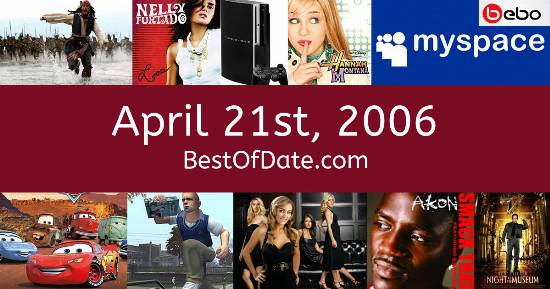 Songs that were on top of the music singles charts in the USA and the United Kingdom on April 21st, 2006.

The date is April 21st, 2006 and it's a Friday. Anyone born today will have the star sign Taurus. Currently, people have "that Friday feeling" and are looking forward to the weekend.

The summer of 2006 is drawing closer and temperatures have started to rise. In America, the song Bad Day by Daniel Powter is on top of the singles charts. Over in the UK, Crazy by Gnarls Barkley is the number one hit song.

George W. Bush Jnr. is currently the President of the United States and the movie Silent Hill is at the top of the Box Office. In the United Kingdom, Tony Blair is the current Prime Minister. Internet users are using MSN Messenger to chat with each other online.

If you were to travel back to this day, notable figures such as Charles Haughey, Steve Irwin, James Brown and Gerald Ford would all be still alive. On TV, people are watching popular shows such as "Futurama", "Fear Factor", "Cold Case" and "Pimp My Ride". Meanwhile, gamers are playing titles such as "F.E.A.R.", "Call of Duty 2", "Final Fantasy XII" and "The Godfather".

If you are looking for some childhood nostalgia, then check out April 21st, 2012 instead.

Tony Blair was the Prime Minister of the United Kingdom on April 21st, 2006.

Enter your date of birth below to find out how old you were on April 21st, 2006.