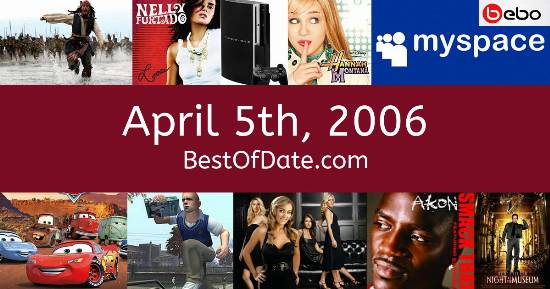 Songs that were on top of the music singles charts in the USA and the United Kingdom on April 5th, 2006.

The date is April 5th, 2006 and it's a Wednesday. Anyone born today will have the star sign Aries. The summer of 2006 is drawing closer and temperatures have started to rise.

In America, the song Bad Day by Daniel Powter is on top of the singles charts. Over in the UK, Crazy by Gnarls Barkley is the number one hit song. George W. Bush Jnr. is currently the President of the United States and the movie Inside Man is at the top of the Box Office.

In the United Kingdom, Tony Blair is the current Prime Minister. Internet users are using MSN Messenger to chat with each other online. Cameras on phones have become the norm. Furthermore, the quality of these cameras are continuing to increase with each new phone release. We are now entering into an age where any event can be photographed or recorded in an instant.

Practically every teenager and adult has a MySpace or a Bebo account. It's 2006, so the music charts are being dominated by the likes of Daniel Powter, Sean Paul, Nelly Furtado, James Blunt, Gnarls Barkley, Shakira and Natasha Bedingfield. On TV, people are watching popular shows such as "The King of Queens", "Fear Factor", "Punk'd" and "Two and a Half Men".

Meanwhile, gamers are playing titles such as "Black", "Tom Clancy's Ghost Recon Advanced Warfighter", "The Elder Scrolls IV: Oblivion" and "The Godfather". Kids and teenagers are watching TV shows such as "Peppa Pig", "Zoey 101", "Avatar: The Last Airbender" and "Ben 10". If you're a kid or a teenager, then you're probably playing with toys such as the PlayStation 2, the PSP and the Xbox 360.

If you are looking for some childhood nostalgia, then check out April 5th, 2012 instead.

George W. Bush Jnr. was the President of the United States on April 5th, 2006.

Tony Blair was the Prime Minister of the United Kingdom on April 5th, 2006.

Enter your date of birth below to find out how old you were on April 5th, 2006.

Here are some fun statistics about April 5th, 2006.