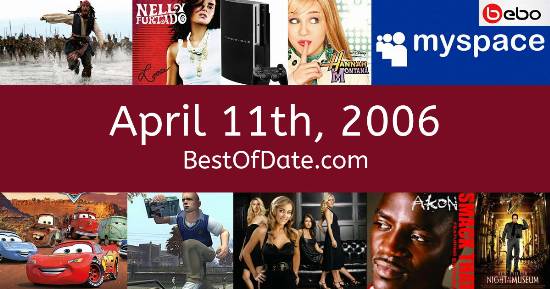 Songs that were on top of the music singles charts in the USA and the United Kingdom on April 11th, 2006.

The date is April 11th, 2006 and it's a Tuesday. Anyone born today will have the star sign Aries. The summer of 2006 is drawing closer and temperatures have started to rise.

In America, the song Bad Day by Daniel Powter is on top of the singles charts. Over in the UK, Crazy by Gnarls Barkley is the number one hit song. George W. Bush Jnr. is currently the President of the United States and the movie Ice Age 2 is at the top of the Box Office.

It's 2006, so the music charts are being dominated by the likes of Daniel Powter, Sean Paul, Nelly Furtado, James Blunt, Gnarls Barkley, Shakira and Natasha Bedingfield. On TV, people are watching popular shows such as "That '70s Show", "Smallville", "Two and a Half Men" and "Desperate Housewives". Meanwhile, gamers are playing titles such as "F.E.A.R.", "Black", "Tom Clancy's Ghost Recon Advanced Warfighter" and "The Elder Scrolls IV: Oblivion".

Kids and teenagers are watching TV shows such as "That '70s Show", "SpongeBob SquarePants", "The Fairly OddParents" and "Laguna Beach: The Real Orange County". If you're a kid or a teenager, then you're probably playing with toys such as the PlayStation 2, the PSP and the Xbox 360.

A Spotify playlist of hit songs from 2006. Take a trip back to the peak days of Shakira, Sean Paul, Justin Timberlake, Gnarls Barkley and Beyoncé.

Tony Blair was the Prime Minister of the United Kingdom on April 11th, 2006.

Enter your date of birth below to find out how old you were on April 11th, 2006.

Leave a comment and tell everyone why April 11th, 2006 is important to you.