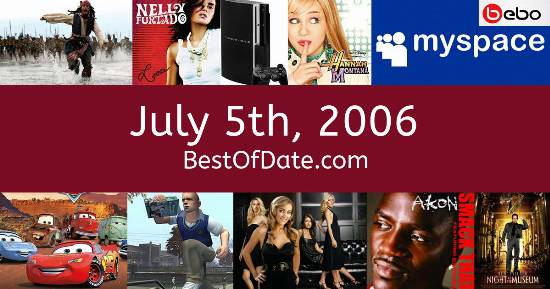 Songs that were on top of the music singles charts in the USA and the United Kingdom on July 5th, 2006.

The movie "Superman Returns" was at the top of the box office on July 5th, 2006.

The date is July 5th, 2006 and it's a Wednesday. Anyone born today will have the star sign Cancer. The 4th of July celebrations in America have come and passed.

It's summer, so the temperatures are warmer and the evenings are longer than usual. In America, the song Promiscuous by Nelly Furtado ft Timbaland is on top of the singles charts. Over in the UK, Hips Don't Lie by Shakira ft Wyclef Jean is the number one hit song.

George W. Bush Jnr. is currently the President of the United States and the movie Superman Returns is at the top of the Box Office. In the United Kingdom, Tony Blair is the current Prime Minister. Internet users are using MSN Messenger to chat with each other online.

Cameras on phones have become the norm. Furthermore, the quality of these cameras are continuing to increase with each new phone release. We are now entering into an age where any event can be photographed or recorded in an instant. Practically every teenager and adult has a MySpace or a Bebo account. It's 2006, so the music charts are being dominated by the likes of Daniel Powter, Sean Paul, Nelly Furtado, James Blunt, Gnarls Barkley, Shakira and Natasha Bedingfield.

A rock music genre called "Emo" is extremely popular at the moment. The genre, which stands for "emotional hardcore", has created a subculture of "Emos" who dye their hair black and wear thick frame glasses. In Germany, the 2006 FIFA World Cup is currently taking place. On TV, people are watching popular shows such as "CSI: Miami", "Without a Trace", "Desperate Housewives" and "Battlestar Galactica".

Meanwhile, gamers are playing titles such as "F.E.A.R.", "Black", "Final Fantasy XII" and "The Elder Scrolls IV: Oblivion". Kids and teenagers are watching TV shows such as "7th Heaven", "Teen Titans", "Drake & Josh" and "Zoey 101". If you're a kid or a teenager, then you're probably playing with toys such as the PlayStation 2, the PSP and the Xbox 360.

If you are looking for some childhood nostalgia, then check out July 5th, 2012 instead.

George W. Bush Jnr. was the President of the United States on July 5th, 2006.

Tony Blair was the Prime Minister of the United Kingdom on July 5th, 2006.

Enter your date of birth below to find out how old you were on July 5th, 2006.

Here are some fun statistics about July 5th, 2006.