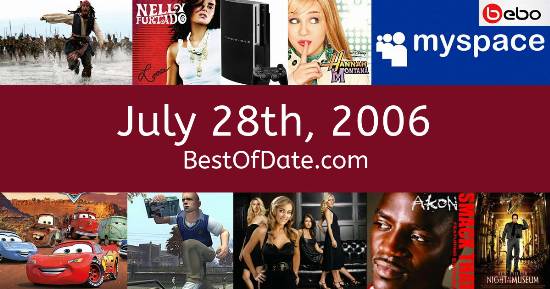 On July 28th, 2006, the following songs were at the top of the music charts in the USA and the UK.

The top "Box Office" movie on this date was the film "Miami Vice".

The date is July 28th, 2006, and it's a Friday. Anyone born today will have the star sign Leo. Currently, people have "that Friday feeling" and are looking forward to the weekend.

It's summer, so the temperatures are warmer and the evenings are longer than usual. In America, the song Promiscuous by Nelly Furtado ft Timbaland is on top of the singles charts. Over in the UK, Don't Stop Me Now Please, Please by McFly is the number one hit song.

George W. Bush Jnr. is currently the President of the United States, and the movie Miami Vice is at the top of the Box Office. In the United Kingdom, Tony Blair is the current Prime Minister. Cameras on phones have become the norm. Furthermore, the quality of these cameras are continuing to increase with each new phone release. We are now entering into an age where any event can be photographed or recorded in an instance.

If you were to travel back to this day, notable figures such as Steve Irwin, James Brown, Gerald Ford and Bam Bam Bigelow would all be still alive. On TV, people are watching popular shows such as "Without a Trace", "Battlestar Galactica", "It's Always Sunny in Philadelphia" and "Prison Break". Meanwhile, gamers are playing titles such as "Fahrenheit", "Guitar Hero", "The Godfather" and "Scarface: The World Is Yours".

Children and teenagers are currently watching television shows such as "The Fairly OddParents", "One Tree Hill", "LazyTown" and "The Hills". Popular toys at the moment include the likes of the PlayStation 2, RoboSapien (toy robot), the PSP and the Xbox 360.

These are trending news stories and fads that were prevalent at this time. These are topics that would have been in the media on July 28th, 2006.

Check out our personality summary for people who were born on July 28th, 2006.

Television shows that people were watching in July, 2006.

Popular video games that people were playing in July of 2006.

If you are looking for some childhood nostalgia, then you should check out July 28th, 2012 instead.

Tony Blair was the Prime Minister of the United Kingdom on July 28th, 2006.

Enter your date of birth below to find out how old you were on July 28th, 2006.
This information is not transmitted to our server.