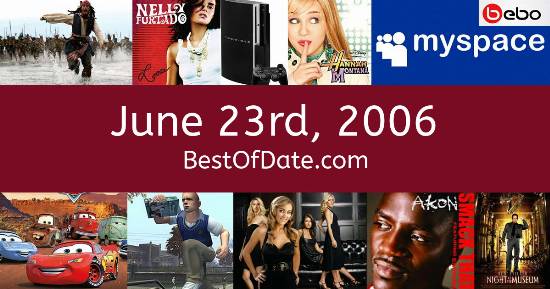 On June 23rd, 2006, the following songs were at the top of the music charts in the USA and the UK.

The top "Box Office" movie on this date was the film "Click".

The date is June 23rd, 2006, and it's a Friday. Anyone born today will have the star sign Cancer. Currently, people have "that Friday feeling" and are looking forward to the weekend.

It's summer, so the temperatures are warmer and the evenings are longer than usual. In America, the song Hips Don't Lie by Shakira ft Wyclef Jean is on top of the singles charts. Over in the UK, Maneater by Nelly Furtado is the number one hit song.

George W. Bush Jnr. is currently the President of the United States, and the movie Click is at the top of the Box Office. In the United Kingdom, Tony Blair is the current Prime Minister. Internet users are using MSN Messenger to chat with each other online.

A rock music genre called "Emo" is extremely popular at the moment. The genre, which stands for "emotional hardcore", has created a subculture of "Emos" who dye their hair black and wear thick frame glasses. In Germany, the 2006 FIFA World Cup is currently taking place. If you were to travel back to this day, notable figures such as Steve Irwin, James Brown, Gerald Ford and Bam Bam Bigelow would all be still alive.

On TV, people are watching popular shows such as "King of the Hill", "CSI: Miami", "The O.C." and "How I Met Your Mother". Meanwhile, gamers are playing titles such as "Gran Turismo 4", "Fight Night Round 2", "Call of Duty 2" and "Kingdom Hearts II". Children and teenagers are currently watching television shows such as "As Told by Ginger", "The Cramp Twins", "Veronica Mars" and "Go, Diego, Go!".

Popular toys at the moment include the likes of Betty Spaghetty (doll), VideoNow (portable player), the PSP and the Xbox 360.

These are trending news stories and fads that were prevalent at this time. These are topics that would have been in the media on June 23rd, 2006.

News stories and other events that happened around June 23rd, 2006.

Check out our personality summary for people who were born on June 23rd, 2006.

Television shows that people were watching in June, 2006.

Popular video games that people were playing in June of 2006.

If you are looking for some childhood nostalgia, then you should check out June 23rd, 2012 instead.

Tony Blair was the Prime Minister of the United Kingdom on June 23rd, 2006.

Find out what your age was on June 23rd, 2006, by entering your DOB below.
This information is not saved on our server.