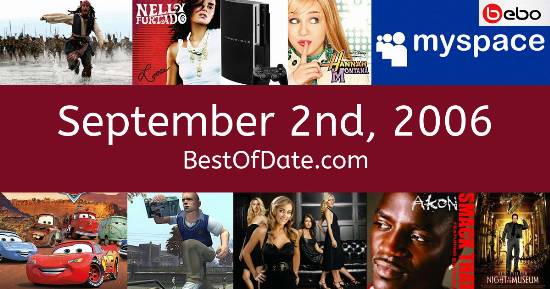 Songs that were on top of the music singles charts in the USA and the United Kingdom on September 2nd, 2006:

The date is September 2nd, 2006 and it's a Saturday. Anyone born today will have the star sign Virgo. Currently, people are enjoying their weekend.

Schools have started back and autumn has arrived, so temperatures have started to cool and trees are beginning to shed their leaves. In America, the song London Bridge by Fergie is on top of the singles charts. Over in the UK, Deja Vu by Beyonce ft Jay-Z is the number one hit song.

George W. Bush Jnr. is currently the President of the United States and the movie Invincible is at the top of the Box Office. In the United Kingdom, Tony Blair is the current Prime Minister. Practically every teenager and adult has a MySpace or a Bebo account.

It's 2006, so the music charts are being dominated by the likes of Daniel Powter, Sean Paul, Nelly Furtado, James Blunt, Gnarls Barkley, Shakira and Natasha Bedingfield. A rock music genre called "Emo" is extremely popular at the moment. The genre, which stands for "emotional hardcore", has created a subculture of "Emos" who dye their hair black and wear thick frame glasses. On TV, people are watching popular shows such as "One Tree Hill", "Grey's Anatomy", "Prison Break" and "The Hills".

Meanwhile, gamers are playing titles such as "F.E.A.R.", "Call of Duty 2", "Dead Rising" and "Saints Row". Kids and teenagers are watching TV shows such as "Everybody Hates Chris", "Ben 10", "Hannah Montana" and "The Hills". If you're a kid or a teenager, then you're probably playing with toys such as "PlayStation 2", "The PSP" and "Xbox 360".

Celebrities, historical figures and noteable people who were born on the 2nd of September:

Who was the Prime Minister of the United Kingdom on September 2nd, 2006?

Enter your date of birth below to find out how old you were on September 2nd, 2006.

Looking for some nostalgia? Here are some Youtube videos relating to September 2nd, 2006. Please note that videos are automatically selected by Youtube and that results may vary! Click on the "Load Next Video" button to view the next video in the search playlist. In many cases, you'll find episodes of old TV shows, documentaries, music videos and soap dramas.

Here are some fun statistics about September 2nd, 2006.