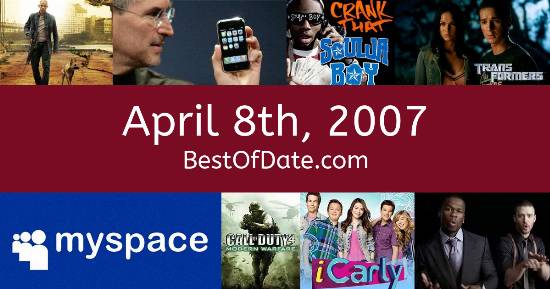 Songs that were on top of the music singles charts in the USA and the United Kingdom on April 8th, 2007:

The date is April 8th, 2007 and it's a Sunday. Anyone born today will have the star sign Aries. Currently, people are enjoying their weekend.

The summer of 2007 is drawing closer and temperatures have started to rise. In America, the song Don't Matter by Akon is on top of the singles charts. Over in the UK, I'm Gonna Be (500 Miles) by Proclaimers is the number one hit song.

George W. Bush Jnr. is currently the President of the United States and the movie Blades of Glory is at the top of the Box Office. In the United Kingdom, Tony Blair is the current Prime Minister. Practically every teenager and adult has a MySpace or a Bebo account.

A rock music genre called "Emo" is extremely popular at the moment. The genre, which stands for "emotional hardcore", has created a subculture of "Emos" who dye their hair black and wear thick frame glasses. It's 2007, so the music charts are being dominated by the likes of Beyoncé, Rihanna, Jay-Z, Sean Kingston, Soulja Boy and Nelly Furtado. Worries about the subprime mortgage market and a recession are continuing to grow. Real estate investment trust "New Century" has just filed for Chapter 11 bankruptcy protection and CNN are currently reporting that there has been a "meltdown" in the subprime mortgage.

On TV, people are watching popular shows such as "Last of the Summer Wine", "The Sopranos", "Pimp My Ride" and "Grey's Anatomy". Meanwhile, gamers are playing titles such as "Dead Rising", "Marvel: Ultimate Alliance", "Call of Duty 3" and "Resistance: Fall of Man". Children and teenagers are currently watching television shows such as "SpongeBob SquarePants", "Dora the Explorer", "Zoey 101" and "Ben 10".

If you're a kid or a teenager, then you're probably playing with toys such as "Xbox 360", "PlayStation 3" and "Nintendo Wii".

Who was the Prime Minister of the United Kingdom on April 8th, 2007?

Enter your date of birth below to find out how old you were on April 8th, 2007.

Looking for some nostalgia? Here are some Youtube videos relating to April 8th, 2007. Please note that videos are automatically selected by Youtube and that results may vary! Click on the "Load Next Video" button to view the next video in the search playlist. In many cases, you'll find episodes of old TV shows, documentaries, music videos and soap dramas.

Here are some fun statistics about April 8th, 2007.